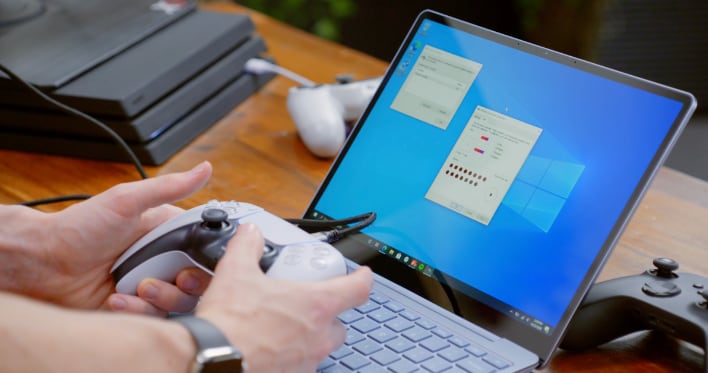 Sony's PlayStation 5 is scheduled to launch on in mid-November, but it appears that today was the big day for reviewers, who have started to receive the massive next-generation console. Actual reviews for the PlayStation 5 are likely under a strict embargo, so we won't be getting any thoughts on how games play or how it compares to the PlayStation 4/PlayStation 4 Pro just yet, but we are getting a look at the all-new DualSense wireless controller.

As you may already know, the DualSense controller is the successor to the DualShock 4, and brings some new functionality to the table. The big additions are haptic feedback and adaptive triggers along with a complete redesign which makes it much larger than its predecessor. YouTuber Austin Evans wasn't able to give his impressions on the PlayStation 5 for obvious reasons, but his NDA didn't stop him from unboxing a DualSense controller and trying it out with some "alternative" hardware.

Using Bluetooth, Evans was able to connect wirelessly to a Google Pixel 5 and play streamed games via Microsoft's xCloud service -- how's that for cross-platform interoperability! On the PC side of things, it should come as no surprise that the DualSense was able to work just fine (via a cable) with a Microsoft Surface Laptop Go.

And here we go #PS5 I can only share photos of the packaging today, but the box feels substantial. Feel free to send your questions along as I dive into console review mode! pic.twitter.com/gO7iyHQtqJ