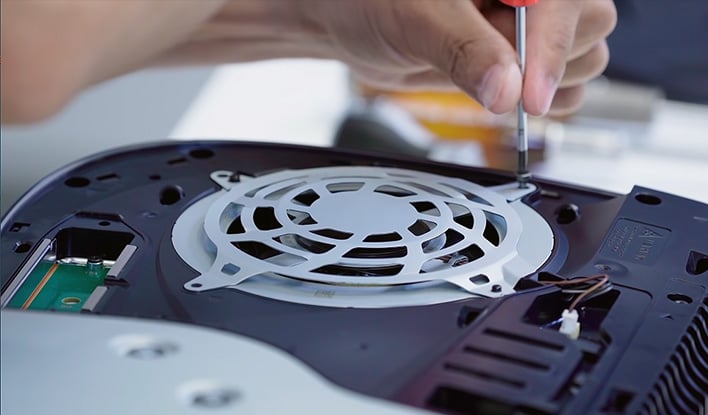 The rather large-and-in-charge cooling fan inside the PlayStation 5 has been a hot topic ever since Sony's official teardown video gave us a view of the bulky part, which partially accounts for the PS5 being the biggest iteration to date. We also continue to learn new things about the fan, and the PS5's internal workings. The latest revelation is that Sony plans to adjust the fan's cooling properties for future games.
There are two version of the PS5, the regular model with a bulge at the bottom for the optical disc drive (ODD) and a slightly slimmer disc-less version. Both are big consoles—the larger of the two measures 390mm high by 260mm deep by 104mm wide (15.4 x 10.24 x 4.09 inches), while the disc-less model is  12mm slimmer (about half an inch).
In a previous interview, Sony's Otori Yasuhiro said using two smaller fans instead of one bigger fan could allowed for a smaller console, but would have cost more. He also said that controlling the rotation of two fans would be more difficult than just one, hence the larger, double-sided fan.
Now in a new interview with 4gamer.net, Otori expanded on this idea, saying the fan speed and properties will be adjust through future firmware updates, depending it does with the first crop of games.
"Various games will appear in the future, and APU behavior data for each game will be collected. Based on this, there is a plan to proceed with the optimization of fan control," Otori said.
That is based on a Google translation of his comment, and it is probably a rough one. However, we get the gist of his statement. Here is the thing—Sony outfitted the mainboard with three temperature sensors, which are used to control the fan speed depending on the highest temperature of the hottest one, along with the custom APU's temperature.
This is interesting, and it means the PS5 could potentially get a bit quieter or louder in the future, depending on how the console reacts to current and upcoming games. It also means there is headroom to go in either direction with the stock fan speed(s).
Beyond the cooling fan, Otori reiterated that the engineering team spent more than two years solving potential issues related to the use of liquid metal for the thermal interface material (TIM), which is both conductive and highly corrosive to aluminum. The specific type of liquid metal found inside the PS5 is a custom solution.
Cool stuff, eh?