Newegg Begins Return Service For These Exploding Gigabyte PSUs, What You Need To Know

Who knew that being a tech enthusiast (or even just a consumer of electronic gadgets) could be so harrowing? Okay, it's not truly that dire, but in the span of about a week, we've reported on a Galaxy A21 smartphone catching fire on an Alaska Airlines plane (prompting an evacuation), and an issue with certain Gigabyte power supply units that can cause them to spark and explode. Newegg can't help anyone with the former, but it is offering to assist with latter, for people who own an affected model.
It was important that Newegg be proactive on the situation, because the two affected PSU models—Gigabyte's 750W GP-P750GM and 850W GP-P850GM—were being offloaded as part of various GPU bundles through Newegg's Shuffle program. It's basically a raffle system, but instead of winning an actual item, if you're selected, Newegg gives you first dibs on hard-to-obtain items.
Cool concept, though the caveat is that many of the items are expensive bundle offers. Since graphics cards are so difficult to come by these days, buyers are willing to pay extra for an added item that they may not necessarily need. In this case, apparently faulty PSUs, which is the other, more pressing caveat. 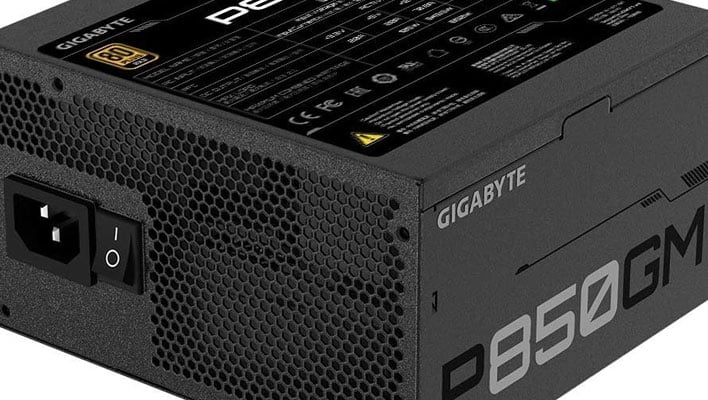 Multiple reviewers reported that the two affected PSU models were prone to failing and even exploding (in a sense) when the over power protection (OPP) feature kicked in. After it began to be reported in the media, Gigabyte issued a comment on the situation, essentially saying the review conditions in which PSUs failed were not indicative of real-world usage.
This ignores that several user reviews prior to all the media attention complained of their units failing (power supply units, that is). Additionally, Steve Burke at Gamer's Nexus took issue with Gigabyte's statement, saying the claim is simply not true. Burke comes into the picture because he witnessed first hand a bunch of affected models giving up the ghost during testing. That simply shouldn't happen.

Nevertheless, Gigabyte offered to replace models that fall within a certain serial number range (SN20343G031011 to SN20513G022635 for the 850W model, and N20243G001301 to SN20453G025430 for the 750W model). But even that has its own controversy, as at least one user claims they were denied a replacement for a model that falls within the covered range. Apparently they were told the replacement program "is applicable only to the newer batches."
Another user said they were also getting the runaround from Gigabyte, and so they contacted Newegg, which was "willing to give me a full refund." And now Newegg is reaching out to owners of affected models.

We have not seen the email first hand, but it is being reported that Newegg is contacting customers who purchased one of the affected PSUs, either as a standalone item or part of a bundle, based on its records.
"Gigabyte is offering return and exchange service to customers who purchased the below power supplies within a defined range of serial numbers. The data table below sets forth the products in question and their respective serial number ranges," the email reads, with the serial ranges outlined. "If your item's serial number falls within the range of this corresponding model number, please reply back to this email so we can assist with setting up a return for a refund or replacement."
It's not clear if people who purchased the PSU as part of a bundle offer will be offered a refund option for just that part, or only a replacement. Hopefully Newegg gives them either option. They may have agreed to a bundle offer, but it's not their fault that the bundled item comes the risk of explosion, after all.
As for the exchange route, Gigabyte said it revised the affected models by adjusting the OPP range, as follows...
That should help, though whether it really solves the issue in its entirety is in question. Our advice? Seek a refund if you can, and pick up a different PSU. It's just worth the risk, especially since PSU failures can drag connected hardware to the grave as well, including your GPU.