Netgear continues to advance the concept of mesh networking, an increasingly popular option due to its ability to cover larger areas without those dreaded dead spots or slowdowns in speeds in remote corners of the home. Its latest effort is the introduction of its Orbi Quad-Band Mesh Wi-Fi 6E System (RBKE960), the first in the lineup to bring the 6GHz band into the fold.
This is essentially an upgraded version of the Netgear's previous top-of-the-line mesh offering, the Orbi Tri-Band Wi-Fi 6 System (RGK853). By adding a fourth band (6GHz), Netgear says its Quad-Band setup provides "much-needed additional Wi-Fi spectrum to handle multi-gigabit" speeds demanded by an increasing number of capable devices, primarily laptops and smartphones.
"This past year pushed home networks to their limits," Netgear says. "Average US household internet speeds rose 30 percent and peak Internet traffic increased 38 percent over pre-pandemic levels. Activities necessitated by the pandemic such as remote work from home, virtual Zoom meets with friends and relatives, first-run movie streaming, online shopping, exercise, gaming, and ordering food are becoming the norm now and going forward." 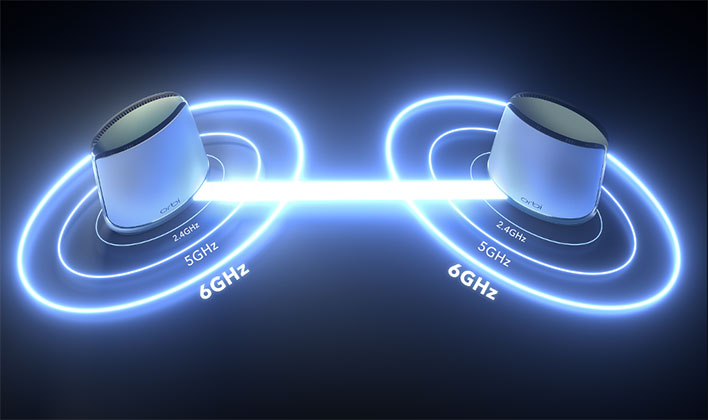 Netgear also says ISPs are expanding the reach of gigabit internet service tiers, with speeds ranging from 1.2Gbps to 2Gbps, and even 10Gbps in some areas. That might be overselling things a bit—broadband coverage still has a ways to go in the US—but it's still nice to see Netgear living on the bleeding edge.
The number of devices supporting the Wi-Fi 6E specification is growing, too. It's not quite widespread, but it does include devices like Samsung's Galaxy S21 and Galaxy Z Fold 3 handsets, as well as its fancy new Neo QLED 8K TV. Same goes for Dell's Latitude 5520 and Lenovo's ThinkPad T14 laptops, and Intel's Wi-Fi 6E PCIe card.
Netgear's latest offering qualifies as the first quad-band Wi-Fi 6E system on the market. It's built around Qualcomm's Networking Pro Series 1610 platform, with a maximum throughput of 16 Wi-Fi streams to blanket large homes, and a dedicated Wi-Fi 6 backhaul.
Combined bandwidth adds up to 10.8Gbps, spread out by way of 1,200Mbps on the 2.4GHz band, two 5GHZ bands capable of 2,400Mbps each, and 4,800Mbps on the 6GHz band. The router portion also serves up a 10Gbps WAN port, a 2.5Gbps LAN port, and three 1Gbps LAN ports for wired connections, while each satellite features a 2.5Gbps LAN port and three 1Gbps LAN ports. 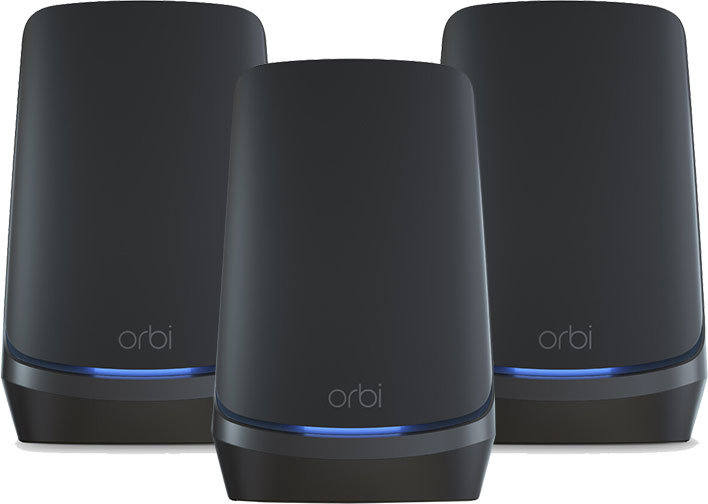 This is not for the faint of wallet/purse. At present, Netgear is taking pre-orders for a three-pack that covers 9,000 square feet, priced at $1,499.99 (available in white or black, the latter of which is exclusive to Netgear's webstore). Those who need additional coverage will soon be able to purchase more satellites individually, at $599 a pop.
If you don't need to live quite on the cutting edge, you can find deals on what now qualifies as last-gen (but still very capable) hardware. Specifically, you can find the Orbi Tri-Band Wi-Fi 6 System on Amazon priced at $499.99 for a two-pack (save 28%) and $979.99 for a three-pack (save 2 percent). Additional satellites run $351.99 each (save 7%).