Netgear is expanding its growing Wi-Fi 6E lineup with an announcement at CES 2022 of a new Nighthawk tri-band Wi-Fi 6E router and, separately, a new game booster service for its Orbi owners. With the pandemic still causing people to work from home and an estimated 227 million Americans playing video games regularly, Netgear is hoping to cash in.

That said, one of the issues many have faced since the days the pandemic began is a battle at home for bandwidth. Moms and dads who have transitioned to working from home are often having to compete alongside their kids for precious bandwidth as they are either taking classes online, or arriving home from a day at school. As more people in the household get online, the stress of all those trying to connect to the internet can cause serious issues. But the arrival of Wi-Fi 6E has helped to resolve these congestion issues—it adds previously unavailable 6GHz Wi-Fi spectrum that can be used to lessen the congestion and deliver faster speeds and reliability.

Yesterday Netgear announced a new addition to its very popular Nighthawk series of routers. Also a CES 2022 Innovations Award Honoree, the Nighthawk RAXE300 router brings with it a combined speed of 7.8Gbps along with the new 6GHz band. The router touts eight Wi-Fi streams and provides Gigabit+ Wi-Fi speeds throughout a home of up to 2,500 square-feet. This should provide ample coverage for the average family trying to use the network at the same time, and allow for more reliable and stable connections to the internet.

The router houses six pre-optimized antennas for Wi-Fi signal strength, coverage, and performance. Along with the six antennas, there is a 2.5Gbps Ethernet port that can be utilized in order to provide Gigabit+ Internet connectivity by connecting to an internet modem, or by connecting on the LAN to high bandwidth devices such as shared network storage. There are also 5 more Ethernet ports that can used to deliver a hardwired connection to multiple devices nearby. The RAXE300 also works alongside Netgear's current Wi-Fi 6E smart home offerings which include the RAXE500 and the recently announced Orbi Quad-Band Mesh Wi-Fi 6E System (RBKE963).

David Henry, president and GM of Connected Home Products and Services for Netgear stated, "We're seeing customers upgrading their home broadband services greater than 1 Gbps and they don't want these speeds to be bottlenecked by older Wi-Fi 5 connections."

The Nighthawk RAXE300 Tri-band WiFi 6E router will be made available in the first quarter of 2022 from Netgear and other resellers for an MSRP of $399.99. The previously announced Orbi 5G Wi-Fi 6 Mesh System will be available as a two pack for an MSRP of $1,099.99. 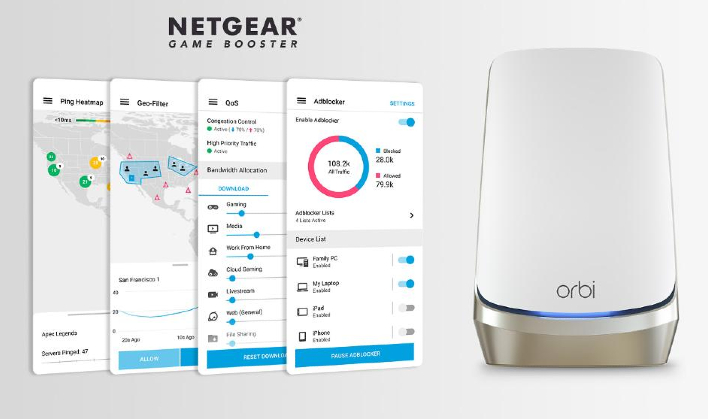 Netgear also announced a new game boosting service aptly called, Netgear Game Booster to be available on its Orbi routers. It is a feature-packed service that provides Orbi customers the tools already found on the Nighthawk Pro Gaming routers in order to enhance network performance and minimize lag for the ultimate gaming experience.

Netgear realizes that gaming has become a huge market and it also knows that as it grows it will lure consumers that may not be attracted to the Nighthawk router, but will be to the Orbi offering. Because of that, it is now offering the same game-enhancing software that once was only available to those who owned a Nighthawk Gaming Pro router. Recent research indicated that more than 60 percent of Orbi users had at least one gamer in the household. A significant number of those gamers played on a console or PC. Netgear recognizes that those gamers could also benefit from the Game Booster service they once were not privy to.

Gamebooster, powered by DumasOS, includes three core components that are all easily controlled from the Orbi App and is aimed at solving the main pain point for gamers, which is lag. The Ping Heatmap and Geo-Filter provides players the power to identify and choose the fastest game servers for their preferred games. This allows the user to reduce the ping by up to 93%. It also helps prioritize network bandwidth to gaming devices and applications with a Network Priority feature.

Along with the three core features, Game Booster also offers Adblocker. This is a new feature on the router that will benefit any device on the network. Adblocker will look to block unwanted ads, and also limit tracking from various web sites. Users can access the blocked list and use it to customize both the domains to be blocked (which hopefully doesn't include Hot Hardware—we have to eat, after all!) and the devices it is active on through the Orbi app.

Netgear Game Booster will be available initially to Orbi Tri-band Wi-Fi 6 mesh systems (series 750 and 850) and on the Orbi Quad-band Wi-Fi 6E system (series 960) soon after with membership on the Orbi App. Game Booster service will launch in Q1 of 2022 and will have a cost of $49.99 per year once you have completed a 30-day free trial.