Netflix officially announced its intentions to enter the extremely lucrative gaming industry this past July. Following up on that, Netflix yesterday tooks it is first step into the already very competitive mobile platform that will include five mobile games at the outset.

Netflix will begin its mobile gaming journey on Google Play Store with five games suited for mobile-only play. Two of the games originated from the Netflix original series Stranger Things and developed by BonusXP. Those are Stranger Things: 1984 and Stranger Things 3: The Game. The next two games, developed by Frosty Pop, are Shooting Hoops and Teeter Up. The last of the five games is Card Blast, developed by Amuzo and Rogue Games. Netflix will go up against Google's own Google Play Pass that allows users to play certain mobile games for free with a monthly subscription.


One of Netflix's other major competitors will be Apple and its mobile gaming monthly subscription option Apple Arcade. Apple has proven how good it is at making money in the gaming industry when it made an estimated $8.5 billion in profit from games in 2019. Netflix clearly wants part of that action and will go head to head with Apple after it launches its gaming campaign on iOS in the coming weeks. 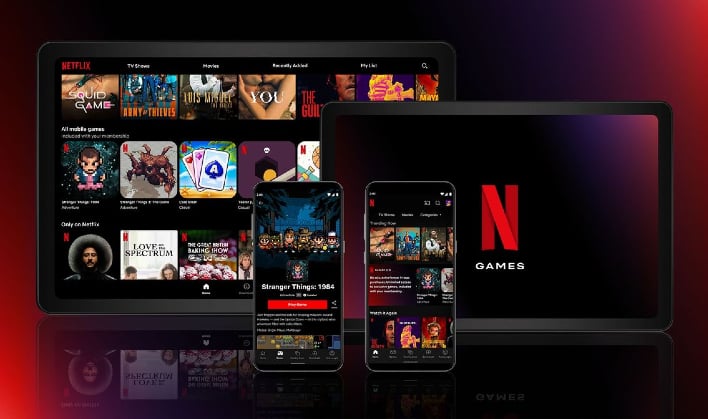 One advantage of the Netflix option is that it offers games as part of its regular monthly subscription. So if you already have a Netflix sub that you're paying for, you will have the games available to you now at no extra cost. Like Apple Arcade, there are not in-app purchases and/or microtransactions associated with any of the games.

At launch yesterday subscribers were having to search for and download the games separately. Later today, however, Netflix is supposed to integrate the games so you will have access to them within the Netflix mobile app. This will make it easy and convenient to find all the games Netflix offers via a dedicated games row and games tab where you can select any game for download. This will also be handy in keeping up when it adds more games to its lineup.

Some of the other features Netflix is offering are games being made available in many different languages, the ability to play the games offered on multiple mobile devices on the same account, and an adults only feature that prohibits children using a kids profile access to any of the games. There will also be games available for play offline as well.

With an estimated global market for video games of nearly $178 billion last year, there is plenty of money to go around. But the competition for that money continues to grow. Amazon has put money into its new cloud gaming service Luna and its own gaming studio Amazon Games. Google has Stadia and Google Play Pass under its belt. And of course Apple has Apple Arcade. Not to mention Microsoft and all its gaming ventures.

Netflix has a tough road ahead, but has an already established streaming service to build off of with its foray into gaming. Its ambitions are high as it aims to not stop with just mobile games, but eventually have games on Xbox and PlayStation as well. If Netflix can stand its ground, the booming gaming market has plenty of room for it to do well.