NASA's James Webb Space Telescope (JWST) has captured a gorgeous image of Neptune, its rings, and seven of the planet's moons. One of Neptune's moons shines so brightly, that it could be mistaken for a star.

Neptune was first discovered in 1846 and has enamored astronomers since. The frigid planet is located 30 times farther away from the Sun than Earth, and orbits in the darker region of our solar system. It is considered an ice giant, due to the make-up of the planet's interior, which has a richer make-up of elements heavier than hydrogen and helium than Jupiter and Saturn. Webb recently turned its high-powered instruments toward Neptune and captured a spectacular image of the planet and its moons.

The Hubble Space Telescope has captured Neptune in the past, but often appears to be blue in those images. This is caused by small amounts of gaseous methane which is captured by visible wavelengths. Webb's Near-Infrared Camera (NIRCam) captures images in the near-infrared range from 0.6 to 5 microns. Because of this, Neptune does not appear blue in its images. 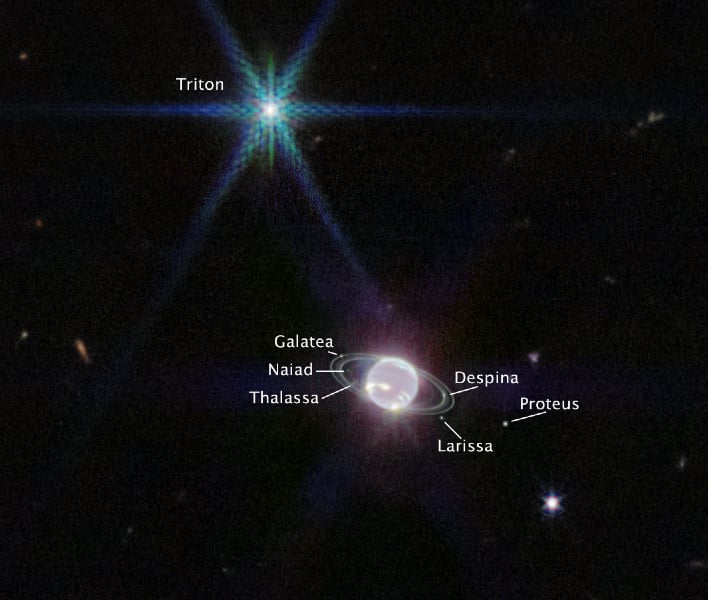 Webb was also able to capture seven of Neptune's moons in its recent images. The brightest, Triton, can be seen at the top of the image and has the signature six-pointed diffraction spikes often seen in other images captured by Webb. This diffraction occurs when the space telescope captures extremely bright objects, such as stars. Triton is covered in a frozen sheen of condensed nitrogen, which in turn reflects around 70 percent of the sunlight that hits it. The moon actually appears brighter than Neptune in the image, because the planet's atmosphere is darkened by methane absorption at the wavelengths used by Webb.

JWST is slated to continue studying Neptune and its unusual moon, Triton, in the coming year. The observatory was able to reveal a continuous band of high-latitude clouds surrounding the planet's southern pole in its most recent images. In future studies, astronomers are hopeful Webb will reveal even more.