"Diamond Rain" could be more prevalent on ice giants throughout the universe than previously thought. The new research has provided scientists with a more complete picture of how diamond rain forms on other planets. It could introduce a new way of fabricating nanodiamonds here on Earth.

In a previous experiment, scientists were able to mimic the extreme temperatures and pressures found inside planets like Neptune and Uranus, and in turn observe diamond rain as it formed. Now, an international group of scientists have been able to use a material that is closer to the chemical makeup of those planets. They have been able to "form and grow at a wider range of conditions and throughout more planets," according to a recent report by SLAC, the National Accelerator Laboratory.

"The earlier paper was the first time that we directly saw diamond formation from any mixtures," noted Siegfried Glenzer, director of the High Energy Density Division at SLAC. "Since then, there have been quite a lot of experiments with different pure materials. But inside planets, it's much more complicated; there are a lot more chemicals in the mix. And so, what we wanted to figure out here was what sort of effect these additional chemicals have."

What the researchers found was that by using PET plastic, often utilized in plastic bottles and food packaging, they were able to reproduce the composition of the planets more accurately. The earlier study had focused on a mixture of hydrogen and carbon. PET plastics introduce oxygen into the equation, which better simulates the activity in ice planets.

In order to test the theory, the researchers used a high-powered optical laser at the Matter in Extreme Conditions (MEC) instrument at SLAC's Linac Coherent Light Source (LCLS) in order to create shock waves in the PET. Once the shockwaves were sent into the plastic, they probed as to what happened in the PET with X-ray pulses from LCLS. 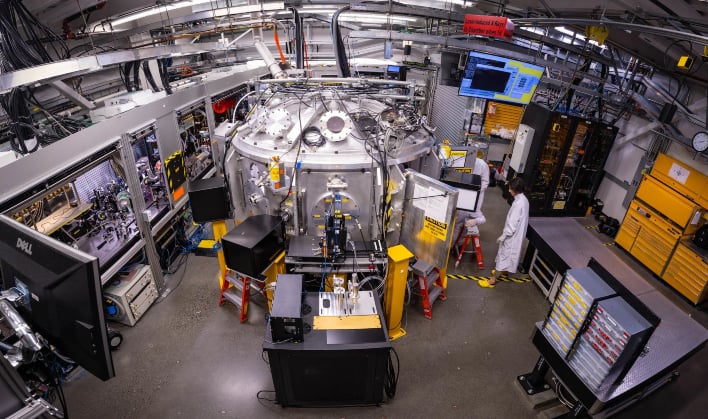 By using a method called X-ray diffraction, researchers observed as the atoms of the material rearranged into small diamond regions. At the same time, they employed another method called small-angle scattering to measure how fast and large those regions grew in size. The second method was not used in the first experiment. By introducing oxygen into the mix, researchers determined that the nanodiamonds were able to grow at lower pressures and temperatures than previously observed.

Dominik Kraus, a physicist at HZDR and professor at the University of Rostock, stated, "The effect of the oxygen was to accelerate the splitting of the carbon and hydrogen and thus encourage the formation of nanodiamonds. It meant the carbon atoms could combine more easily and form diamonds."

The research is also promising in terms of providing a potential path forward for producing nanodiamonds here on Earth. These "tiny gems" are already used in abrasives and polishing agents, and in the future could be used for quantum sensors, medical contrast agents and reaction accelerators for renewable energy.

"The way nanodiamonds are currently made is by taking a bunch of carbon or diamond and blowing it up with explosives," explained SLAC scientist Benjamin Ofori-Okai. "This creates nanodiamonds of various sizes and shapes and is hard to control. What we are seeing in this experiment is a different reactivity of the same species under high temperature and pressure."

The research indicates that by adding additional chemicals, the process could be sped up. Laser production could also offer a cleaner and more controlled method of producing nanodiamonds. The researchers say if they can design ways to change some things about the reactivity, then they can change how quickly they form, and thus how big they get.