NASA's Webb telescope captures first images and spectra of the Red Planet, revealing data beneath the planet's blinding light. The new information will be used along with other data collected by orbiters, rovers, and other telescopes to reveal more about Mars.

While the James Webb Space Telescope (JWST) is located nearly a million miles from Mars, it is uniquely positioned to the planet. This perspective is allowing the telescope's infrared instruments to collect data of Mars' observable disk, even with the blinding light the planet reflects toward JWST. Astronomers have been able to overcome the intense light produced, by using special observing techniques.

In a NASA blog, the space agency describes the light from Mars as blinding to Webb's highly sensitive instruments, causing a phenomenon known as "detector saturation." Astronomers were able to overcome this saturation, by using very short exposures, measuring only a select amount of light hitting the detectors, and then applying special data analysis techniques. 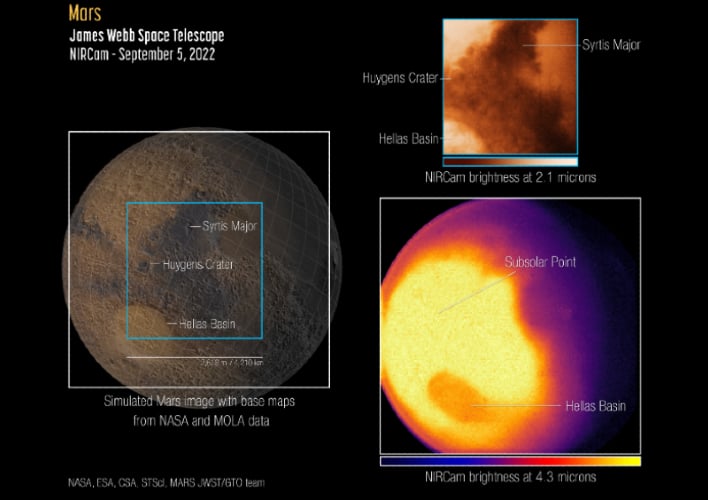 The image above shows Webb's first images of Mars using the Near-Infrared Camera (NIRCam). The image highlights a region of the planet's eastern hemisphere at two different wavelengths, or colors of infrared light. The image on the left is a surface reference map from NASA and the Mars Orbiter Laser Altimeter (MOLA), along with two Webb NIRCam instrument fields of view laid on top. The near-infrared imagery from JWST is shown on the right.

The shorter-wavelength of NIRCam is dominated by sunlight, as highlighted in the image in the top-right of the above photo. The Huygens Crater, the dark volcanic rock of Syrtis Major, and the Hellas Basin are all evident in the image. The longer wavelength of NIRCam, as seen in the lower-right image, shows thermal emission, or light given off by the planet as it decreases in temperature.

Another view of Mars was captured by Webb, showing the space telescope's unique ability to capture the planet using spectroscopy. Spectroscopy is a scientific method of studying objects and materials based on detailed patterns of colors, or wavelengths, according to NASA. 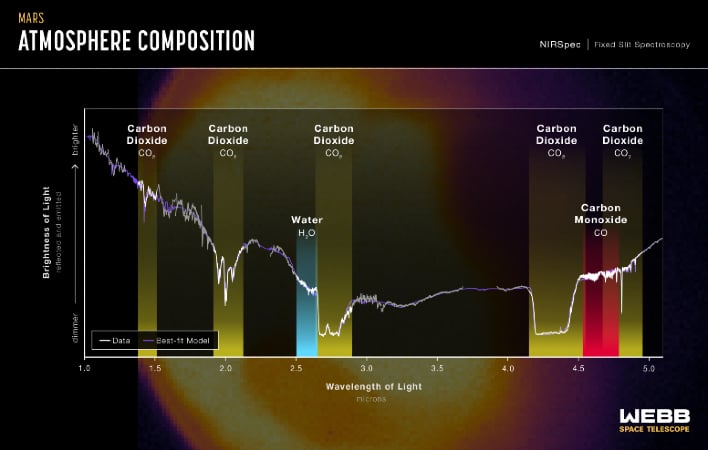 Astronomers are currently analyzing the differences between the various wavelengths in order to learn more about places across the planet at a particular time and day, as well as revealing more about Mars as a whole.

The infrared spectrum data was gathered by Webb's Near-Infrared Spectrograph (NIRSpec), which utilized all six of the instruments high-resolution spectroscopy modes. Early analysis indicates a rich set of spectral features that showcase information concerning dust, icy clouds, as well as the composition of the planet's atmosphere. This information is currently being prepared for a paper that will be submitted to a scientific journal for peer review and publication.