NASA's Webb Space Telescope proves cool enough to capture the complex skeletal structure of a distant spiral galaxy. Webb's Mid-InfraRed Instrument (MIRI) must operate at 33 degrees Celsius below the rest of the observatory in order to remain sensitive to the mid-infrared region of the electromagnetic spectrum.

The James Webb Space Telescope (JWST), and the Hubble Space Telescope continue to work in tandem to unveil new details of deep space. This time the two space observatories captured images of spiral galaxy IC 5332, which lies 29 million light-years from Earth. While Hubble was able to show the spiral galaxy in ultraviolet and visible-light, JWST used its MIRI instrument to reveal an eerie view of IC 5332 in mid-infrared. The image below highlights the different aspects each space telescope is able to unveil of the same galaxy. 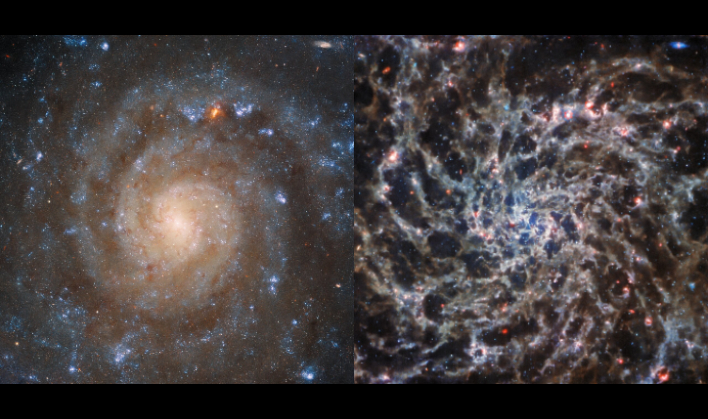 MIRI is unique, in that it must operate at only 7 degrees Celsius warmer than absolute zero, which is the lowest possible temperature according to the laws of thermodynamics. The highly sensitive instrument needs the frosty environment in order for its detectors to operate correctly, according to European Space Agency (ESA). MIRI has a dedicated active cooling system that helps to ensure its detectors are kept at the correct temperature.

The ability to capture space with both Hubble and Webb is proving to be a tremendous asset for scientists and astronomers. Each observatory is capable of capturing the same region in space in different ways, and thus provides unique information the other cannot. While Hubble shows ultraviolet and visible light in incredible detail, Webb removes the dusty regions and uncovers areas which visible light are not able to travel through.