The James Webb Space Telescope (JWST) has nearly reached its desired orbit, nearly 1 million miles away from Earth. As the NASA telescope nears the second Lagrange point (L2), it will begin the intricate process of aligning its mirrors.

Earlier this month, JWST achieved another milestone as its gold-coated mirror was fully deployed. This followed the deployment of the extremely important sunshield, which will protect the telescope from the heat and light of the Sun, Earth and other celestial objects. On January 19th, the JWST team completed the mirror segment deployments, but the mirrors are still not quite ready to begin taking pictures of deep space. They still need to be precisely situated in order to reach their final optical positions, which will enable its 18 primary mirror segments to operate as one single 21.3-foot-wide mirror.


In a recent blog post, Erin Wolf, James Webb Space Telescope Program Manager at Ball Aerospace stated, "Next up in the wavefront process, we will be moving the mirrors in the micron and nanometer ranges to reach the final optical positions for an aligned telescope. The process of telescope alignment will take approximately three months." 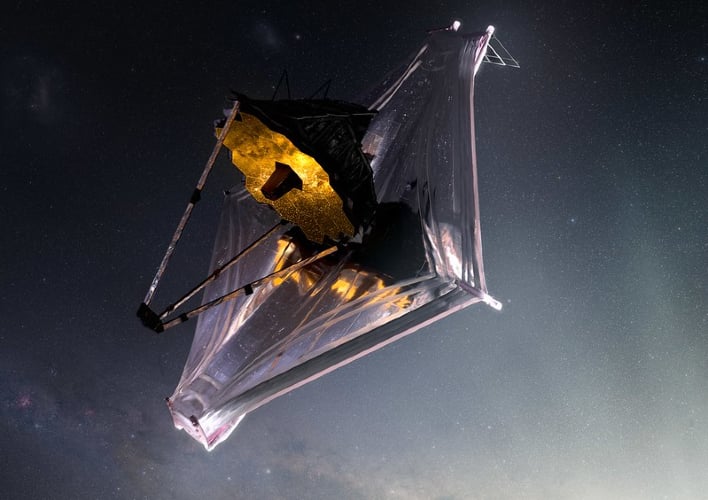 JWST is just shy of being in space a month, and has already traveled nearly 1 million miles. The telescope is expected to complete its final correction burn on January 24th, which will place it into its desired orbit. Its final destination is the second Sun-Earth Lagrange point, or better known as L2 for short. The reasoning for sending JWST to this location is because it is optimal for an infrared observatory. This differs from Hubble, in that Hubble orbits the Earth, while JWST will orbit the Sun.

Sending JWST to L2 is ideal due to the fact that the Sun, Earth, and Moon are always on one side of space, permitting Webb to keep its optics and instruments constantly shaded. Keeping the optics and instruments cold is critical when it comes to the telescope's infrared sensitivity. The telescope will be utilizing light from faint and extremely distant objects in order to produce the images astronomers and scientists are hoping for. So, it is imperative that the telescope be protected from external light sources, as much as possible.


Getting JWST to L2 is not simple, however. Karen Richon, Webb's Flight Dynamics lead engineer, describes the process as, "Think about throwing a ball straight up in the air, as hard as you can; it starts out very fast, but slows down as gravity pulls it back towards Earth, eventually stopping at its peak and then returning to the ground." She continued, "Similar to your arm giving the ball energy to go up a few meters from the Earth's surface, the Ariane 5 rocket gave Webb energy to go the great distance of 1.1 million kilometers, but not quite enough energy to escape Earth's gravity." Essentially, Webb is continuously slowing down at this point. If allowed to stop, the telescope would be in an distinctly elliptical orbit. Therefore, about every three weeks or so, small rocket engines aboard Webb will be used to keep it orbiting L2.

When it comes to the intricate and precise mirror adjustments, Lee Feinberg, optical telescope element manager at NASA's Goddard Space Flight Center, states, "Our primary mirror is segmented, and those segments need to be aligned to a fraction of a wavelength of light. We're not talking microns, we're talking a fraction of a wavelength. That's what's tricky about Webb."

Once all the mirrors are aligned and instruments calibrated, the telescope will be 100 times more powerful than Hubble. NASA has indicated that it will be so sensitive to infrared light, that it would be able to detect the faint heat of a bumble bee as far away as the Moon. However, if the teams at NASA were to try and take an image with the telescope today, they would get 18 separate images, which would be very blurry and terrible to look at, according to Feinberg.

Feinberg says, "The big thing is getting the 18 primary mirror segments pointing in a similar way so that their images are about the same size. Some of them might be very defocused and so you might get a big spot (blurred star image) on segment 5 and a small spot on segment 3."

NASA is hoping to have the Webb telescope able to capture an image of a star that's phased sometime in March, and have it fully aligned around the end of April. Following that, the teams will still need to calibrate NIRCam, and the other three spectrographic instruments. That will take an additional two months or so to complete. Not until that point will the first images be released to the public.

"We want to make sure that the first images that the world sees, that humanity see, do justice to this $10 billion telescope and are not those of, you know, hey look, a star," stated Jane Rigby, Webb operations project scientist at Goddard. The world awaits those first images.