After being delayed due to possible danger from space debris, astronauts aboard the International Space Station (ISS) went for a stroll in space to repair a faulty antenna.

Astronauts Thomas Marshburn and Kayla Barron have been given the go ahead to complete a spacewalk that was originally scheduled for November 30th. NASA made the decision to delay the spacewalk due to a possible danger of space debris and to give them time to assess the risk. It was unknown at the time if the space debris that was in question were remnants from the Russian ASAT that destroyed a Russian satellite recently. 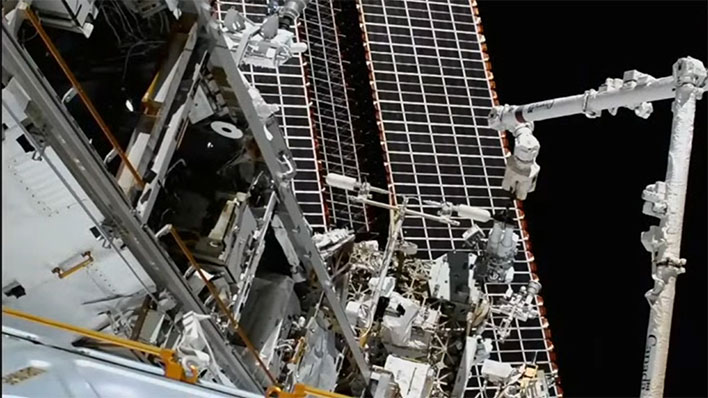 Dana Weigle, NASA's deputy manager of the ISS, stated at the time of the delay that the risk to astronauts was within what she referred to as "normal atmospheric fluctuations and the normal amount of debris that moves through." She added, "What it really tells us is EVA (extravehicular activity) has always been risky."

The spacewalk and repair of the faulty S-Band antenna is being broadcast live on NASA TV and via NASA's YouTube channel (which can be watched below). It started at 7:10am ET and will last around six and a half hours. Check it out...

The two will be working at the Port 1 truss structure, where the antenna in question is mounted. The antenna recently lost ability to send signals to Earth via NASA's Tracking and Data Relay Satellite System. Even though the antenna's issues had limited impact on ISS operations, the decision was made to go ahead and address the problem to ensure communications redundancy. In addition to the S-Band antenna that is being repaired, there is also a low-rate-S-band system, as well as a high-rate KU-band communication system that sends back video.