NASA has made the decision to delay a spacewalk that was scheduled for today, November 30 due to space debris. Astronauts were set to swap out a communications antenna on the International Space Station (ISS).

NASA astronauts Thomas Marshburn and Kayla Barron were originally tasked for the spacewalk to replace a faulty antenna system on the ISS. The spacewalk had been set to be shown live via NASA Television, the agency's website and on the NASA app. However, a notification of space debris led NASA to delay the walk because it did not have time to properly assess the risk it could impose on the safety of the astronauts.

It is uncertain if the debris that has caused the delay originated from the Russian ASAT that destroyed one of Russia's own satellites on November 15th, creating a space junkyard of sorts. The incident sent astronauts scurrying as they were forced to undertake emergency procedures for safety. NASA administrator Bill Nelson released a statement shortly after the incident saying, "With its long and storied history in human spaceflight, it is unthinkable that Russia would endanger not only the American and international partner astronauts on the ISS, but also their own cosmonauts." 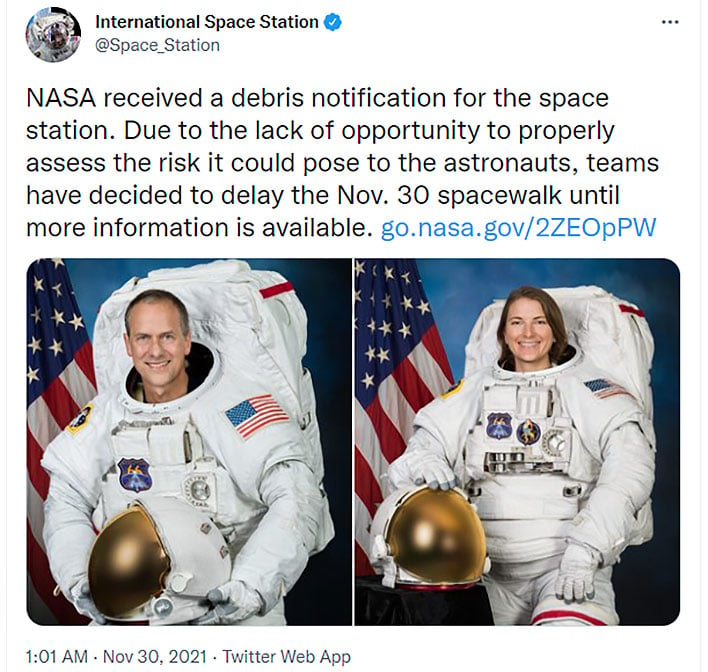 NASA's deputy manager of the International Space Station Program, Dana Weigle stated that while the debris field from the ASAT was very concentrated at first, it had dispersed over time. The risk to an astronaut performing a spacewalk had been increased by 7% according to Weigel, but she continued, "is not a large increase and that's well within what we see with normal atmospheric fluctuations and the normal amount of debris that kind of moves through. What it really tells us is EVA (extravehicular activity) has always been risky."

The risk the debris possibly presented astronauts was a concern that it could penetrate the spacesuits of the two astronauts, or the space station itself. Debris that could actually puncture a spacesuit are much smaller than anything that NASA is able to track, according to Weigel. And even though debris could penetrate a spacesuit, Wiegel added, "There's an emergency oxygen package on the suit that would feed it for a while."

Weigel did say that previous spacewalks incurred higher risks than the one that was postponed today. She added, "Unfortunately, when you have a debris event like this and you get a lot of really small pieces scattered around, it just becomes part of the average environment. At some point, there is not a specific directional aspect to the debris. So there's nothing different that they will do out on the spacewalk."

Both Marshburn and Barron arrived to the ISS aboard the SpaceX Crew Dragon capsule on November 11th. It would have been Marshburn's fifth spacewalk and the first for Barron, and the station's 245th spacewalk in support of assembly, maintenance, and upgrades. The delayed spacewalk would have had the two astronauts replacing a faulty antenna system with a spare mounted somewhere on the backbone truss structure. NASA has not rescheduled the spacewalk according to its Twitter post today, stating it was waiting on more information..