The Mars Perseverance rover has been busy collecting samples of Mars rock and other minerals since its arrival on the red planet. Now NASA and the European Space Agency (ESA) are working together to develop a way to bring those samples back to Earth.

Teams at NASA have been scouring the data provided by the Perseverance Mars. The most recent data included findings from a bedrock that was likely formed by red-hot magma that interacted with water at some point in Mars' history. The news was exciting to scientists back on Earth, but it also complicates things a bit, as it has direct implications for both understanding and accurately dating critical events of Jezero Crater where it was found, and it has larger implications for the planet itself. This is why NASA and the ESA are working hard to come up with a way to get the samples Perseverance has been collecting back to Earth where they can be studied much more closely.

The Perseverance Mars rover mission is only the first of a series of NASA has planned for Mars. At this time, two more missions are planned that are aptly named, Mars Sample Return missions. The first mission will feature a spacecraft landing near (or in) the Jezero Crater to collect samples from Perseverance and then launch from the planet into Mars orbit. The second mission will include a third spacecraft that will retrieve the samples in Mars orbit and return them back to Earth safely. These two missions are being planned for the early to mid 2030s. NASA is currently testing the robots that will be tasked with securing and returning the samples.

In order to be able to pull this off, NASA and the ESA will have to develop a series of spacecraft and robots. The first will be a Sample Retrieval Lander that is scheduled to launch in the mid 2020s. It will be accompanied by an ESA-led sample fetch rover and a NASA-led Mars Ascent Vehicle rocket. The lander will make its way to Mars and then land on the red planet close to where Perseverance is located. It will then dispatch the fetch rover to collect the samples.

Once the fetch rover has collected the samples from Perseverance it will make its way back to the lander, at which time it will transfer them to the Mars rocket. There is a second option built in to this relay in case the fetch rover runs into issues. If the fetch rover is unable to complete the relay, Perseverance can hold on to some of the collected samples and make the delivery to the Mars Ascent Vehicle itself. It will be the Mars Ascent Vehicle that will be tasked to get the samples into Mars' orbit to make the next leg of the relay. 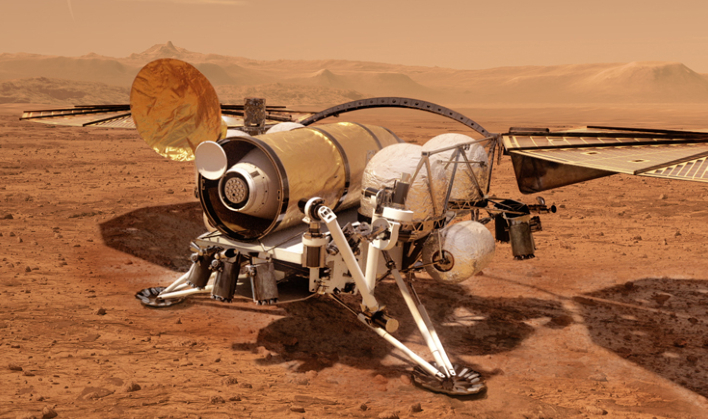 The Mars Ascent Vehicle will secure the samples, then launch from the red planet along with the sample return container. This will mark the first time ever that a rocket will launch from Mars into orbit. Once in orbit, the Capture/Containment and Return System (aboard the Earth Return Orbiter) will essentially catch the container, orient it and transfer it into a clean zone for its return to Earth.

The ESA-led Earth Return Orbiter is the fifth member of the relay team, which houses the NASA-led Capture Containment and Return System and Earth Entry Vehicle. It is slated to launch around the same time as the Sample Return Lander in the mid 2020s. Once the samples have been secured, the orbiter will make its way back to Earth where the Earth Entry Vehicle, a disk-shaped vehicle with a heat shield, will separate and make the final leg of the relay as it returns the samples back to Earth.

This is clearly a monumental task. With so many different spacecraft and robots involved, it would only take one malfunction to throw a wrench into the whole plan. But NASA and the ESA have a good track record despite the complexity involved with missions of this type.

After the samples get back to Earth they will be looked at with a fine toothed comb for generations to come. Scientists and geologists will work diligently to unlock as many mysteries of the red planet as possible. There is no doubt that all the information that is being collected now and in the future will be of vast importance to any future plans to put humans on the surface of Mars.