NASA's Mars helicopter Ingenuity took flight for the 17th time, but something impeded its data transfer to Mars Perseverance during its final descent phase. The loss of data transfer has NASA holding off on its next flight while it waits for an update on the situation.

Ingenuity made the trip to Mars attached to the belly of the Perseverance rover. Once it made it to the red planet, it had to safely detach itself before it could make its inaugural flight on April 19, 2021 as it flew for a total of 39.1 seconds at a height of around 3 meters. Since then the Mars helicopter has made 16 more successful flights, including its latest one. It is the helicopter's latest ascent on December 5th that has NASA waiting on more data before giving the go-ahead for its next airborne mission.

After completing its planned 614-foot (187 meters) flight to the northeast, something caused a loss of radio communication between Ingenuity and the Perseverance Mars rover during the helicopter's final descent. About 15 minutes later, Perseverance received several packets of additional Ingenuity telemetry suggesting that the flight electronics and battery were healthy.

All signs pointed to the flight being a success and that the loss of data was due to an issue caused by a challenging radio configuration between Perseverance and Ingenuity. However, this has led NASA to postpone any future flights until it is able to receive the missing data so it can confirm the vehicle's health. In a blog post from December 9th, NASA indicated that the data transfer is expected to occur at any time in the next few days. 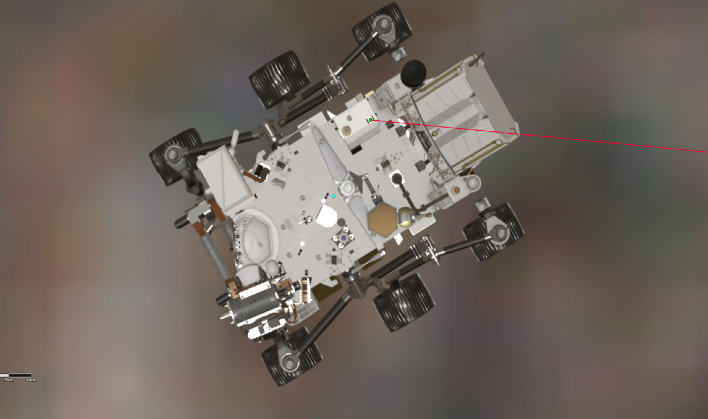 In the picture above a green dot toward the top center of frame indicates the location of the Mars Helicopter Base Station antenna on Perseverance. This is where radio signals are sent and received from Ingenuity. The red line represents the line of sight to the rotorcraft during the final moments of Flight 17. At the back of the rover and on the right, the Multi-Mission Radioisotope Thermoelectric Generator (MMRTG) angles above the antenna and impedes direct communications between the rover and helicopter as it descended toward the surface of the red planet.

A radio's signal strength is dependent upon how clear the path, or line-of-sight (LOS), is between the transmitter and the receiver antennas. The LOS can be disrupted by terrain, such as the helicopter landing in a depression, or it can be obstructed by items on Perseverance. During the flight, Ingenuity was tasked with flying to a landing site which placed a 13-foot (4 meter) hill called "Bras" in the LOS between the two antennas, but with a cruise altitude of 33-feet Bras presented little obstruction to the radio signal. It was during the helicopter's descent, however, that it seems both the terrain and MMRTG caused a loss of LOS between Perseverance and Ingenuity. 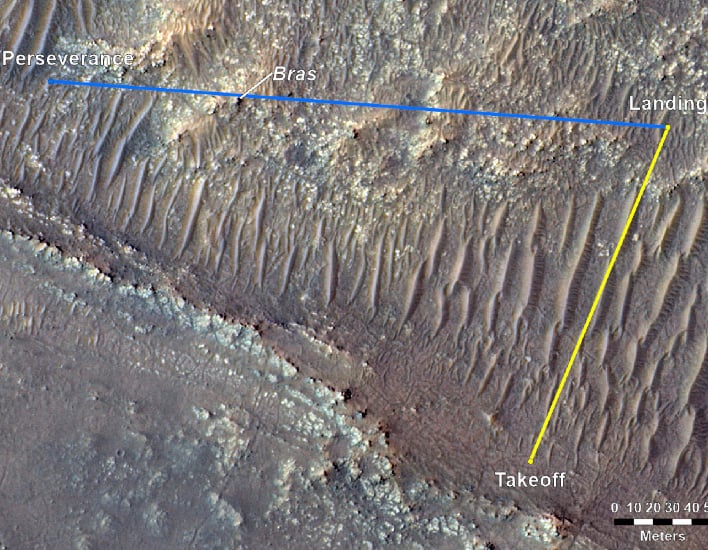 NASA believes that the flight was a success, because there is nothing in what it has seen up to this point to suggest otherwise. The information it received just 15 minutes after the flight was completed showed the battery was still being charged by its solar array. As of right now the team is waiting to receive the rest of the data before making the next leg of Ingenuity's journey back to "Octavia E. Butler" landing site. Flight 18 is expected to happen in the next two weeks.

As Ingenuity continues to fly farther and make more daring flights, NASA fully expects to have more instances where data will be impeded in some way. The teams monitoring the flights will do everything possible to avoid such a loss, but temporary loss of radio link is a natural part of helicopter operations on Mars.