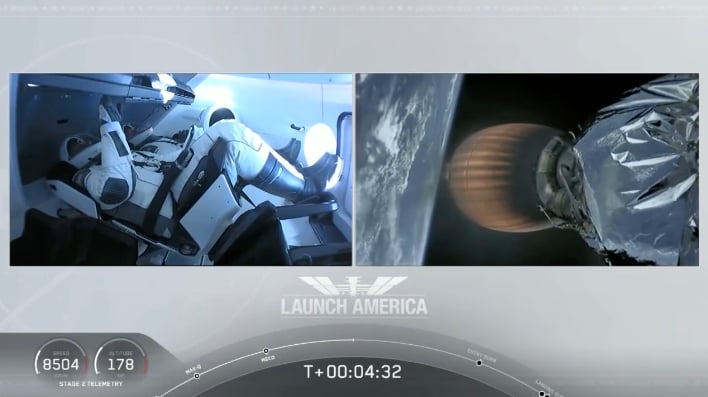 After the first “window” for launch was scrubbed due to weather on Wednesday, SpaceX and NASA were today able to successfully launch the Demo-2 crewed mission to the International Space Station (ISS). Onboard the Crew Dragon capsule that lifted off from the historic Launch Complex 39 at Cape Canaveral via a Falcon 9 rocket are NASA astronauts Robert Behnken and Douglas Hurley.

Today’s launch was once again threatened by clouds and bad weather, but SpaceX was able to “thread the needle”, so to speak, and pull off a picture-perfect launch. This is strictly a demonstration mission for the astronauts to test out the rigors of launch, vehicle life support, and various vehicle functions while in orbit, and on the voyage to the ISS. Duties onboard will be split between the two astronauts; Hurley will be in charge of launch, landing, and recovery (after splashdown). Behnken will be in charge of rendezvous, docking and undocking from the ISS.

“We specifically, as part of this test flight, designed in some time in the preflight phase as well as closer to the space station so we can test out actual manual flying capability of the vehicle, just to see and verify that it handles the way we expect it to and the way the simulator shows it to fly,” said Hurley when speaking with the press. “It’s a prudent part of our flight test, just like anything else, in case the eventuality happened for a future crew that needed to take over manually and fly spacecraft. So we’re just doing our part to test out all the different capabilities of Crew Dragon.”

The Crew Dragon is set to dock with the ISS roughly 24 hours from now. During that time, Hurley and Behnken will be performing critical vehicle functions and trying to catch up on some much-needed rest before they reach the ISS.

As for the Falcon 9 launch vehicle, it made a successful landing on the drone ship "Of Course I Still Love You" after putting the two astronauts into orbit. SpaceX is making these booster recoveries seem like routine business, and we have to wonder why other aerospace companies haven't attempted the same type of reusability instead of making single-use rockets (which seems wasteful to us now).

With that being said, this is the first time in 9 years that astronauts have been lofted to space from the United States. Previously, NASA had been forced to pay Russia $86 million per seat to take astronauts to the ISS following the retirement of the Space Shuttle. Now with the SpaceX's Crew Dragon -- and Boeing's Starliner -- NASA will have two homegrown options to send astronauts into space, at a lower cost to taxpayers.