The James Webb Space Telescope (JWST) continues to unveil secrets of the universe, as it captures a Tarantula Nebula in high-resolution detail. The image also shed light on what astronomers previously thought was an older star.

Located approximately 161,000 light-years away, the Tarantula Nebula lies within the Large Magellanic Cloud galaxy. It is the largest and brightest star-forming region within the Local Group, or the galaxies nearest our own Milky Way. This is in large part why astronomers decided to take a more detailed look at the area, according to a recent blog post by NASA.

Astronomers decided to focus three of Webb's instruments on the Tarantula Nebula, in order to reveal new secrets that lie within it. The first was the Near-Infrared Camera (NIRCam), which highlighted the region that resembles "a burrowing tarantula's home, lined with its silk." This view showcases the nebula's cavity, which has been hollowed out by scorching radiation from a cluster of mammoth young stars. These young stars are what make up the pale blue in the image. Pillars that contain forming protostars will in time materialize from their "dusty cocoons and take their turn shaping the nebula."

It was the space telescope's Near-Infrared Spectrograph (NIRSpec) that shed new light on what astronomers once thought was an older star. The new view showed that the star was instead only beginning to emerge from its pillar. Astronomers said that without Webb's high-resolution spectra at infrared wavelengths, this could not have been revealed. 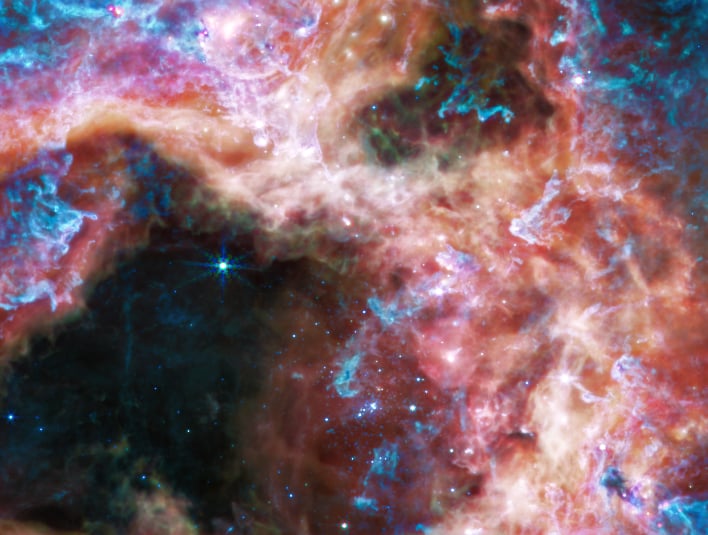 Presenting the Tarantula Nebula in yet another way, Webb's Mid-Infrared Instrument (MIRI) unveils the cooler gas and dust glow. MIRI's longer infrared wavelengths allow areas to be seen that are absorbed at the shorter wavelengths the other instruments utilize (see image above).

The Tarantula Nebula presents an interesting view for astronomers. It is similar to the universe's "cosmic noon," referring to when the cosmos was only a few billion years old. Stars within the nebula are forming at a much faster rate than in our own Milky Way and have a different chemical composition. This makes the Tarantula Nebula the closest and easiest region for astronomers to try and better understand what was happening in the universe as it was reaching its high noon.

It is still early on in Webb's journey to unveil the secrets of the universe, and it will surely reveal more about the origin of the universe as time goes on. By studying areas such as the Tarantula Nebula, the telescope provides researchers with data to compare to deeper observations of more distant galaxies from the actual era of cosmic noon. As NASA stated in its blog, "Webb has already begun revealing a universe never seen before, and is only getting started on rewriting the stellar creation story."