NASA's Webb telescope has captured its first ever direct image of a planet outside our own solar system. Exoplanet HIP 65426 b is a massive gas planet, about 12 times the size of Jupiter.

The James Webb Space Telescope (JWST) continues to capture images never before seen. While still under the peer-review process, astronomers are excited about capturing its first direct image of an exoplanet, which is located 355 light-years from Earth.

Approximately 15 to 20 million years old, HIP 65426 b is a young planet in comparison to Earth, which is around 4.5 billion years old. As a gas giant, NASA says it has no rocky surface and is therefore not inhabitable. The planet can be seen through four different light filters below. The purple and blue images were capture using Webb's NIRCam, while the yellow and red images were taken using the space telescope's MIRI instrument. 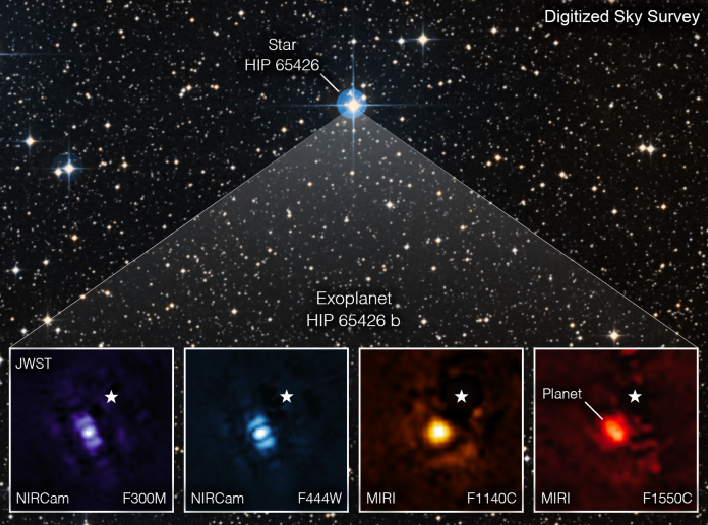 "This is a transformative moment, not only for Webb but also for astronomy generally," remarked Sasha Hinkley, Associate Professor of Physics and Astronomy at the University of Exeter in the United Kingdom. Hinkley led a large international collaboration that took part in the observations.

Astronomers actually discovered the young planet in 2017 utilizing the SPHERE instrument on the European Southern Observatory's Very Large Telescope in Chile. The instrument took images using short infrared wavelengths of light. Webb's image uses longer wavelengths, allowing for the detection of new details the ground-based telescopes are unable to view due to the intrinsic infrared glow of Earth's atmosphere.

"It was really impressive how well the Webb coronagraphs worked to suppress the light of the host star," Hinkley stated. The exoplanet is around 100 times farther from its host star than Earth is from the Sun. This is enough distance that JWST can easily separate the planet from its host star in the image. Typically, capturing direct images of exoplanets is extremely difficult due to stars being so much brighter than the planets.

"Obtaining this image felt like digging for space treasure," explained Aarynn Carter, a postdoctoral researcher at the University of California, Santa Cruz. "At first all I could see was light from the star, but with careful image processing I was able to remove that light and uncover the planet."

Carter points out that the most exciting part of all this is that it is just getting started, in terms of the capabilities of the Webb telescope. He added, "There are many more images of exoplanets to come that will shape our overall understanding of their physics, chemistry, and formation. We may even discover previously unknown planets, too."