Neil Armstrong spoke the first words from the moon, “That’s one small step for man, one giant leap for mankind”, on July 20, 1969. Five decades later NASA plans to connect the moon to Earth via a Lunar Network (LunaNet), before once again placing boots on the moon, and eventually to Mars and even beyond.

NASA has plans to put humans on the surface of the moon through its Artemis program. The program has four phases as of now. The first will consist of using the Space Launch System (SLS), and Orion capsule with no crew. The second Artemis launch will have a crew and will orbit the moon in preparation for putting the first boots back on the moon's surface with Artemis III. The third launch is scheduled in 2024 and will include the first female to step onto the moon.

But before NASA launches astronauts to the moon, it is working on building a vast network to provide an internet connection. LunaNet will provide communication between crew on and around the moon, hazardous weather alerts and a lunar search and rescue capability.

The core network for LunaNet is Delay/Disruption Tolerant Networking (DTN). This will allow for data to travel through the network and get to its destination even if it encounters disruptions in the signal. This is a game changer in that prior missions relied upon pre-scheduled links with either a space relay or a ground-based antenna which could limit communication and efficiency. 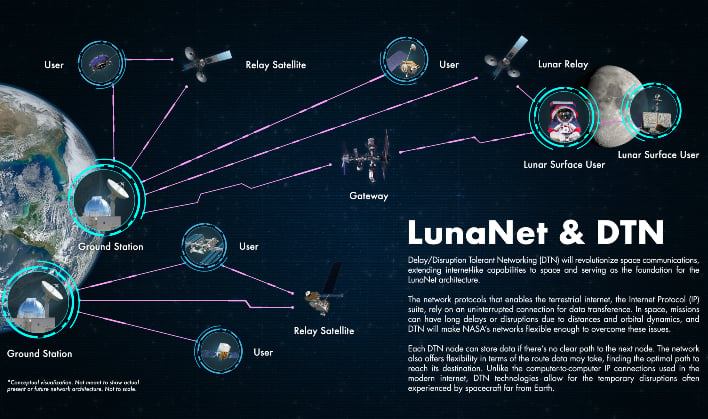 Navigation for astronauts will also be enhanced. Lunanet will provide navigation services that encompass everything they need for autonomous navigation while in orbit or on the moon itself. Cheryl Gramling, Associate Chief for Technology of the Mission Engineering and Systems Analysis Division, says, “LunaNet will provide a new paradigm for Earth-independent navigation, assuring crewed and robotic missions can quickly and accurately determine their locations and feed that forward to their planning systems.”

Along with enhanced navigation, astronauts will also have advanced detection and information services. These services will provide alerts and other critical information, such as hazardous weather conditions, to its users. This will greatly improve awareness of astronauts and other autonomous assets on the moon’s surface giving them a definite advantage when it comes to preparing and averting disaster.

Nodes will be used to perform measurements by researchers on Earth using their radio and infrared optical communications link. This network of nodes could provide a baseline for a comprehensive study of the lunar environment over a period of time that will give researchers a better understanding of the moon’s environment.

LunaNet will also be capable of detecting radio emissions (PDF) from distant celestial objects. This will provide scientists the opportunity to test novel theories about space science and advance scientific knowledge. Perhaps we will finally get E.T.’s phone to connect to home.

All of this information will not only be used for making our next venture to the moon a success but creating the concept of more realistic ventures to Mars and beyond. How soon we will hear the first words from mankind being uttered from Mars as they step onto the red planet’s surface is still to come.