As the International Space Station enters its third decade of service, NASA begins to look at transitioning to commercial services. The Space Station is set to finish out its operations until the end of this decade.

Space stations are going to be taking on a very different look and feel in the coming years. Companies like Blue Origin, which is planning on developing a commercial space station of its own, and SpaceX are taking over the landscape. With that in mind, NASA is looking to transition its space station endeavors over to those and other commercial companies. But for now, NASA has been given the funds by the Biden-Harris administration to finish out this decade of service.

In response to the National Aeronautics and Space Administration Transition Authorization Act of 2017, NASA has submitted its International Space Station Transition Report to Congress. It states, "a report evaluating the International Space Station (ISS) as a platform for research, deep space exploration, and low-Earth orbit (LEO) spaceflight in partnership with its four international space agency partners, and the commercial sector." The report is an update to a one from 2018, and details the steps being taken to ensure a smooth transition to commercial services, as well as the the goals for ISS over the next decade.

The report lists five major mission goals, all of which should see significant advances in the next decade. They are as follows:
ISS has been home to many space experiments over the last three decades. Perhaps a few of the lesser known ones are 20 commercial facilities operating aboard ISS today. Those include a 3D printer, a bioprinter, external Earth observation and materials platforms, and an airlock (which are available for both NASA and paying customers). NASA believes that commercial engagement is one step towards ensuring space continues to thrive beyond ISS. One of the docking ports of ISS was awarded to Axiom Space, which plans to attach a series of commercial modules that will eventually detach to become a LEO free-flying destination. 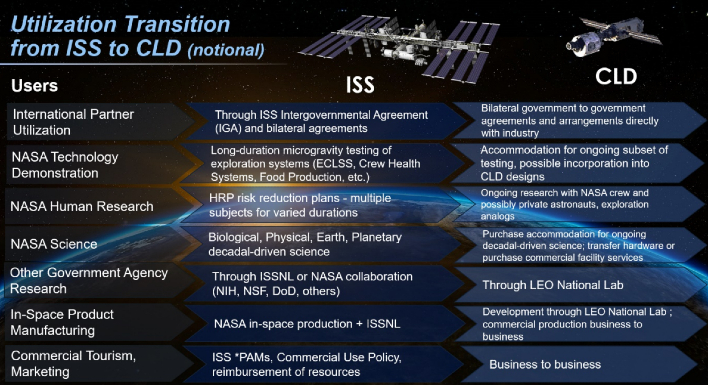 The report also states, "It is NASA's goal to be one of many customers of commercial LEO destination services, purchasing only the goods and services the Agency needs. CLDs, along with commercial crew and cargo transportation, will provide the backbone of the human LEO ecosystem after the ISS retires."

"The private sector is technically and financially capable of developing and operating commercial low-Earth orbit destinations, with NASA's assistance. We look forward to sharing our lessons learned and operations experience with the private sector to help them develop safe, reliable, and cost-effective destinations in space," said Phil McAlister, Director of Commercial Space at NASA Headquarters. "The report we have delivered to Congress describes, in detail, our comprehensive plan for ensuring a smooth transition to commercial destinations after retirement of the International Space Station in 2030."

ISS has provided more to humanity that one could ever put into one article. Its contributions to space travel, habitation, as well as so many other things have been extraordinary. While we look forward to seeing where commercial companies can take us in the future, we will always be grateful for the progress those involved with the ISS have given us.