Blue Origin announced that it is delaying its NS-19 mission due to forecasted winds on Thursday and Friday of this week, but has already rescheduled it for Saturday (barring more bad weather). The flight is set to carry two notable crew members into low Earth orbit, former NFL great Michael Strahan and Alan Shepard's eldest daughter, Laura Shepard Churchley.


Many probably still have the vision of Star Trek star William Shatner, aka Capt. Kirk, peering out a window of New Shepard and viewing Earth from space. The flight also included four astronauts along with Shatner. Audrey Powers, Vice President of New Shepard Operations said before that mission, "At Blue Origin, we are motivated by the dreamers that inspire us and the builders who turn those dreams into reality."

Jeff Bezos founded Blue Origin with the vision of a future that includes millions of people living and working in space for the benefit of Earth. The flights that include recognizable names are not only a means of advertising the company, but also a way of researching and testing new technology that will power the future of the company in space. One of those ventures is Orbital Reef, a business park located in space.

The latest flight has been rescheduled for a tentative launch date of Saturday, December 11 at 9:45am ET from Launch Site One. The flight team has completed its Flight Readiness Review and the vehicle has been confirmed to meet all mission requirements for launch. Astronauts completed their training on December 8, leaving only the weather as a factor prohibiting NS-19's launch. Weather permitting, you can watch the flight at Blue Origin's website. Live launch coverage will being at T-90 minutes (so 8:15am ET).

NS-19 will carry two honorary guests Michael Strahan and Laura Shepard Churchley, along with four paying customers. Alan Shepard, Laura's father, was the first American to fly in space. So, this should be a very emotional moment for the Shepard family as they watch his eldest daughter become the familiy's second member to enter into space. 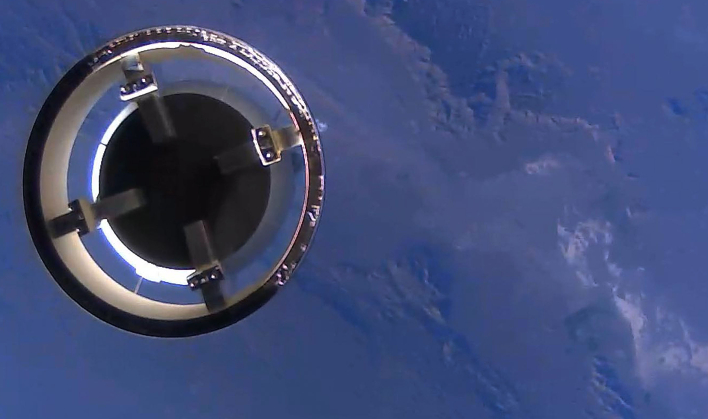 One may wonder where Michael Strahan has found the time and energy to train and be ready for a spaceflight. The former NFL player and Super Bowl Champion is currently a co-anchor on ABC's "Good Morning America" and also hosts the game show "$100,000 Pyramid." Along with those two duties, Strahan serves as an analyst for "Fox NFL Sunday" and participates in the "Thursday Night Football Pregame Show" live from New York City. It leaves one wondering what Strahan will tackle next.

One of the four members who paid to fly on NS-19 is the Chairman and CEO of Voyager Space, Dylan Taylor. Also flying along is the managing member of Dick Holdings, LLC., Evan Dick. The third member of the crew is Lane Bess who is the Principal and Founder of Bess Ventures and Advisory. The fourth member is Cameron Bess who is a content creator who identifies as pansexual and is proud to represent marginalized communities.

The capsule used for spaceflight has a capacity for six astronauts and pressurized and environmentally-controlled for comfort for each passenger. Each of the passengers has a window seat so that they can view the entire flight and eventually Earth from above. Every person aboard the capsule is considered a passenger as Blue Origin notes there are no pilots.

When it comes to the safety of those aboard, Blue Origin does provide an escape system that is located in the middle of the capsule. The escape system has been in testing since 2012 and has had three successful escape tests.

When Blue Origin finally gets the opportunity to launch Strahan and Churchley into space, there will surely be a lot of eyes watching. Each launch brings the company closer to making its Orbital Reef project a reality as well. With NASA looking to put humans back on the Moon and companies like Blue Origin looking to create actual working environments in low Earth orbit, the future of space travel and inhabitation are looking more and more promising.