As NASA's Orion spacecraft began its journey back to Earth, it captured more awe-inspiring images, with our home planet finding a way to photo-bomb a few. Orion is set to make splashdown in the Pacific Ocean on Sunday, December 11, 2022.

The Artemis I mission had a bit of a rough start, with several delays to its launch. However, since then the Orion spacecraft has had few hiccups during its inaugural flight. The images Orion has sent back have been incredible, with the latest coming while the spacecraft was within 80 miles of the lunar surface and traveling at a speed of about 655 mph. Now, the Artemis I mission is coming to a close as the Orion spacecraft has begun its journey back to Earth. 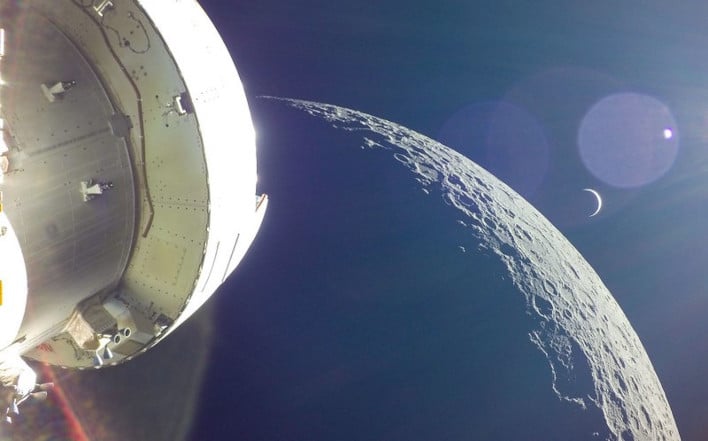 "Orion is heading home! Today the team achieved another momentous accomplishment, flying Orion just 80 miles from the surface of the Moon," remarked NASA Administrator Bill Nelson. "The Lunar flyby enabled the spacecraft to harness the Moon's gravity and slingshot it back to Earth for splashdown."

The mission management team decided on Monday to deploy recovery assets off the coast of California ahead of the December 11th splashdown of Orion. Once the spacecraft hits the waters of the Pacific Ocean, a team of divers, engineers, and technicians will depart the recovery ship on small boats and arrive at the capsule. Once the team has secured the capsule, it will be towed to the back of the ship, known as the well deck. At that point, a cable will be attached to the spacecraft, and Orion will be pulled into a specially designed cradle inside the ship's well deck for its safe return to land.


NASA will test a new entry technique on the Artemis I mission, the first skip entry for a human spacecraft. This maneuver is designed to pinpoint its landing spot in the Pacific Ocean. Orion will "dip into the upper part of the Earth's atmosphere and use that atmosphere, along with the lift of the capsule, to skip back out of the atmosphere, then reenter for final descent under parachutes and splashdown," according to NASA. The space agency described it as "a little like skipping a rock across the water in a river or lake."

"Last week, we completed our final rehearsal with the USS Portland, which will be our recovery ship for Artemis I," stated Melissa Jones, Landing and Recovery Director, at NASA's Kennedy Space Center. "We had a great three days working with them to refine our procedures and integrate our teams so we can meet the objectives of recovering the Orion spacecraft."

During the Artemis mission, Orion has used approximately 8,050 pounds of propellant, which is about 180 pounds less than expected. NASA reported that as of 5:29 p.m. CST on December 5th, Orion was traveling 244,629 miles from Earth and 16,581 miles from the Moon, at a "cruising" speed of 668 mph.