As space travel and habitation technologies advance forward, we inch ever closer to the day humans will walk on the surface on Mars. Researchers understand that returning humans home from Mars, however, will more than likely require a Martian-based fuel supply and data suggests bacteria may be the solution.

NASA's Artemis program is slated to put mankind back on the surface of the moon by 2024. And Blue Origin's low-orbit business park is supposed to begin by mid-decade. With information gleaned from these current advancements, it is not hard to imagine that we will finally succeed in taking humans to Mars as well.

The reality of traveling to Mars is that it would require a large amount of rocket fuel, which equates to a much heavier and costly payload. So, shipping the required propellants and oxygen required for a return trip back to earth is simply not a viable option with current technology. It would require an estimated 30 tons of methane and liquid oxygen (LOX) to power a launch of a Mars Ascent Vehicle (MAV) from the surface of Mars into low orbit. This translates into a 500 ton payload at the cost of approximately $8 billion dollars. Researchers have recognized this problem and have been hard at work devising a method to produce the necessary rocket propellant and oxygen needed on Mars itself.

A group of researchers at the Georgia Institute of Technology are suggesting a biotechnology-enabled in situ resource utilization (bio-ISRU) strategy. It would leverage Martian conditions, such as low gravity, abundant Carbon Dioxide, water, and access to sunlight, to produce a Martian based rocket propellant. This method would also alleviate much of the initial launch weight and eliminate safety risks associated with transporting large stock piles of rocket propellant. 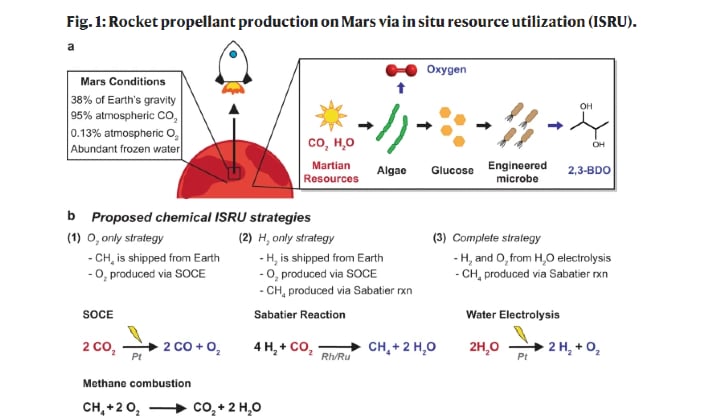 By using the Martian sunlight, carbon dioxide, and water, cyanobacteria (algae) would be grown as a feedstock for an engineered microbe that would produce the Martian based propellant, 2.3-butanediol (2.3-BDO). Mars has an abundance of carbon dioxide and frozen water, so researchers conclude that it is possible to produce algae, and in turn glucose which will be used to create the engineered microbe an ultimately the 2.3-BDO propellant.

One of the proposed methods for obtaining a sufficient temperature is composed of four modules. The first being cyanobacterial cultivation in photobioreactors or biofilm growth. The second, consists of cyanobacteria biomass preprocessing composed of biomass concentration via membrane filtration and enzymatic digestion in a stirred tank. The third being a microbial fermentation of the cyanobacterial glucose to produce the 2.3-BDO. And finally the fourth module using 2.3-BDO extraction and separation via sequential liquid-liquid extraction and membrane separation to achieve 95% purity. (See below for a visual of how these modules may appear) 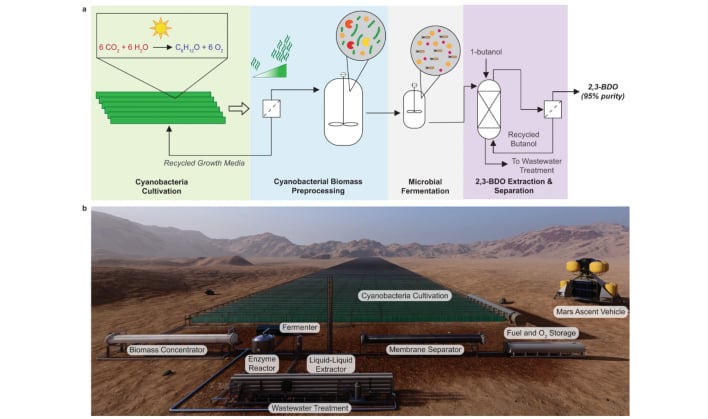 All of this has one huge hurdle, however. NASA does not currently allow microbes to be transported to the surface of Mars. In its Planetary Protection guidelines it states it does so to protect destinations from contamination by Earth life. Researchers are hopeful that their work will demonstrate not only how safe it could be to use their proposed methods, but also the clear advantages of doing so. Researchers do admit that a Martian bio-ISRU approach would still need to be properly implemented and fully tested on Earth before ever launching a mission to Mars.

The proposed ideas by researchers can be found by visiting the website for Nature Communications. The proposal goes a bit deeper into the science behind the ideas brought forth.

As NASA prepares to launch its Artemis program early next year, it does so thinking it may one day help enable a manned Mars mission. Ideas such as those proposed by the researchers at the Georgia Institute of Technology will help NASA moving forward as it figures out how to overcome the many barriers that currently exist in transporting humans to and from Mars.