When Intel announced the lineup for its Arc "Alchemist" graphics cards, there were three tiers, just like its CPUs. We've seen Arc A300 GPUs, and we've seen Arc A700 GPUs, but so far, the A500 series is missing in action. Well now, a new benchmark leak may contain exactly that; with 16 Xe Cores, it lands directly between the A380 and A750.

This leak comes to us by way of "retired" regular leaker Komachi Ensaka who spotted the benchmark result in the Compubench database. As you could guess from the name, Compubench is a test of compute capability. It uses OpenCL, which means it can run on pretty much anything.


The Compubench result for the unidentified GPU—simply called "Intel Xe Graphics"—clearly indicates that it has 16 "Xe Cores." That gives it 256 execution units, for a total of 2,048 shader ALUs. This gives it double the execution resources of an Arc A380, but it's still well behind the A750's 448 EUs.

Actually, this specific configuration is already sold by Intel in the mobile space. Branded "Arc A550M", it sports the very same 16 Xe Cores and 256 EUs running at a low clock of 900 MHz to fit in a 60W TDP. It's quite possible that this unnamed desktop part is the very same silicon simply strapped to a desktop card and clocked quite a bit higher: up to 2450 MHz, if the Compubench test is correct. 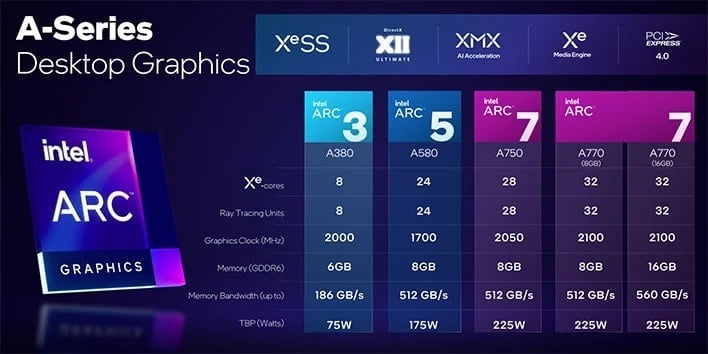 Interestingly, when Intel announced the Arc 5 series, it only revealed specifications for the A580. That card was supposed to come with 24 Xe Cores, which would give it 384 EUs and 3072 shader ALUs. It's possible then that this leaked part will be released as an "A550" for desktop, or perhaps that the specifications of the A580 have changed since the announcement.