Mushkin has released a new flagship solid state drive (SSD) line, the Redline Vortex series, and not only is it the fastest NVMe drive in the company's garage, it's one of the speediest SSDs ever made. Well, on paper, anyway—we haven't tested the Redline Vortex (yet) but with a rated sequential read speed of up to 7,430MB/s, this drive has the potential to deliver spectacular performance.
It's been an interesting journey in the realm of solid state storage as it's passed through the PCI Express 4.0 bus. When the first PCIe 4.0 SSDs arrived, speeds topped out at around 5,000MB/s. Then a bit later, advances in controller design and firmware pushed speeds to and beyond 7,000MB/s, with a small handful of the absolute fastest models hovering around 7,400MB/s. That's where the Redline Vortex finds itself.
Mushkin isn't divulging details about the specific NAND flash memory chips it is using, but did say it's employing an InnoGrit IG5236 ("Rainier") controller. We've gone hands-on with this controller in our Adata XPG Gammix S70 Blade review, which boasts similar speed ratings and performed exceptionally well in our testing.
There are three capacities up for offer, including 2TB, 1TB, and 512GB. Here's how they specs compare... 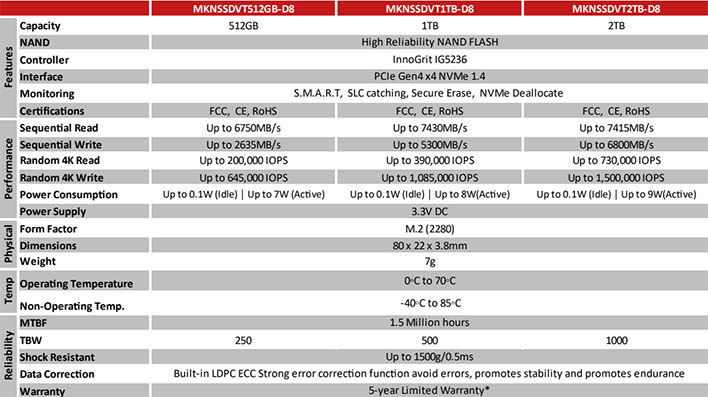 Technically the 1TB model boasts the fastest rated read speed at 7,430MB/s, though it's really a virtual the 2TB drive, which sits at 7,415MB/s. Meanwhile, the rated write speed is appreciably higher on the 2TB variant at 6,800MB/s, versus 5,300MB/s on the 1TB model. It also flexes much higher random 4K read and write speeds.

The 512GB model, meanwhile, checks in with a 6,750MB/s read speed and 2,635MB/s write speed. Still very fast over all, but trailing behind its bigger siblings.

These new models arrive right as Microsoft announced that its DirectStorage API for Windows is here. This essentially gives game developers access to an optimized storage stack to take better advantage of the speed capabilities of SSDs, the eventual upshot being reduced load times.
Micron's drives are compatible with the PlayStation 5 as well (see our guide on how to upgrade your PS5 with a fast SSD). Both the 1TB model ($124.99) and 512GB drive ($77.99) are available on Amazon immediately. It's not clear when the 2TB model will be in stock or how much it will cost.