AMD is on track to release its Ryzen 7000 series CPUs to retail less than three weeks from now (September 27, to be exact). So begins the Zen 4 era. Of course, processors are only part of the platform equation—the other half belongs to the chipsets and related motherboards. To that end, MSI has gone and posted MSRPs for a handful of upcoming X670/X670E motherboards, including its top tier MEG X670E Godlike slab.
If you've paid attention to past iterations of the Godlike branding, you know these boards don't come cheap. That is the again the case with the X670E model. According to an updated listing on MSI's online store in the US, the MEG X670E Godlike will debut at $1,299.99 later this month. While obviously pricey, it almost feels like a bargain compared to the MEG Z690 Godlike for Alder Lake, which launched at $2,099.99 earlier this year.
As you might expect, the MEG X670E Godlike is decked out with copious bells and whistles. Among them is a 4.5-inch touchscreen IPS display that provides hardware monitoring, debugging, and various touch controls and customizations.
At the heart of the latest Godlike iteration is a 24+2+1 phase power design with dual CPU power connectors and 10-layer PCB. Combined with premium components and generous heatsink coverage, what this basically entails is a foundation that is prepped and primed for aggressive overclocking.

Other features include four DDR5 DIMM slots supporting up to 128GB of RAM, 10Gbps and 2.5Gbps LAN ports, Wi-Fi 6E and Bluetooth 5.2 for wireless chores, four M.2 slots, eight SATA 6Gbps slots, onboard 7.1-channel audio, three PCIe x16 slots, and a fleshed out I/O with a lot of USB options. Just note that all this goodness comes packed into an Extended ATX (E-ATX) form factor, so plan accordingly when picking out a case.

We can all drool over owning a Godlike-tier motherboard but rest assured that MSI isn't leaving out users with more pedestrian budgets in the lurch. Of the four AM5 boards MSI has posted to its US store, the least expensive model is the Pro x670-P WIFI, priced at $289.99. 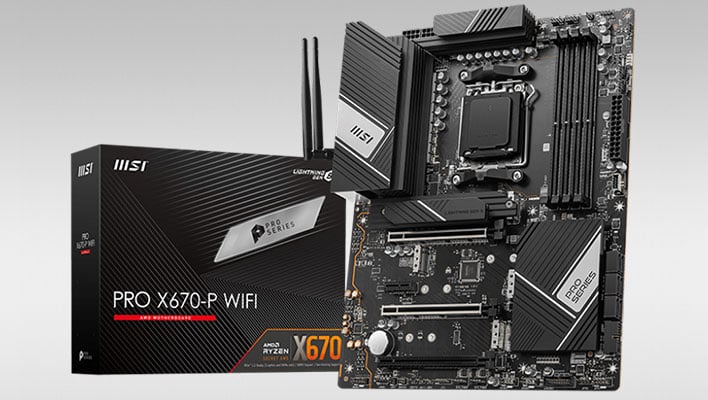 It doesn't come with a fancy LCD screen and it's not quite as robust, but still looks like a decent foundation for Zen 4. That includes an enhanced power design (14+2+1) with a dual rail power system and dual 8-pin CPU power connectors, and some of the same core amenities—four DDR5 DIMM slots supporting up to 128GB of memory, four M.2 slots, six SATA 6Gbps ports, 2.5G LAN (no 10Gbps LAN, though), and Wi-Fi 6E + Bluetooth 5.2 for wireless duties. All this comes packed into an 8-layer PCB.

One notable difference, however, is that the three PCIe x16 slots lack PCIe 5.0 support. It's a different I/O scheme too, though still fleshed out fairly well. 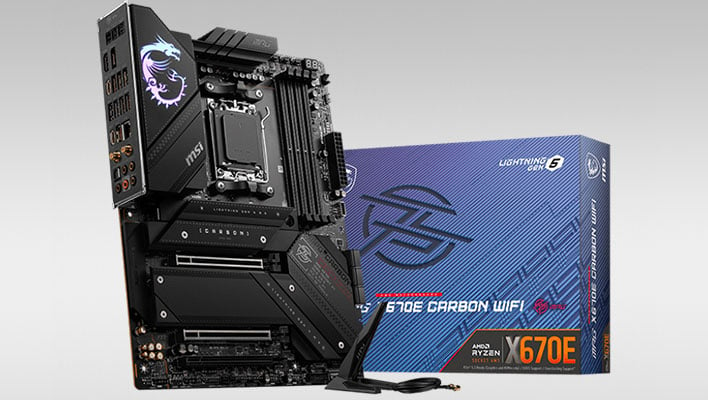 Sitting one rung up is the MPG X670E Carbon WIFI with a 8-layer PCB, priced at $479.99 (MSRP). This one ups the ante with a beefier power scheme (18+2+1 power design).
Out of the four motherboards listed, this is the cheapest one with PCIe 5.0 support. Aside from a few more ports and upgraded power phases, that appears to be the main thing that separates it from the cheaper Pro X670-P WIFI. 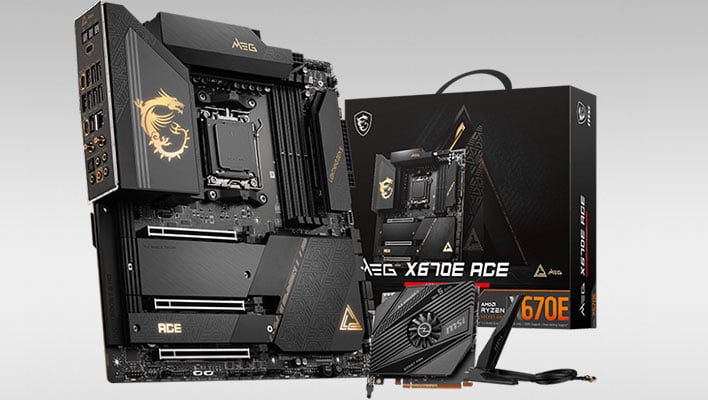 Finally, the MEG X670E Ace enters the scene with a $699.99 MSRP. It also sports an 8-layer PCB and comes closest to the Godlike model at roughly half the price.
This one boasts a 22+2+1 power phase design, six M.2 connectors (four integrated plus two more through a pre-installed module), support for up to 128GB of DDR5 memory, Wi-Fi 6E + Bluetooth 5.2 wireless connectivity, 10Gbps LAN, and an assortment of USB ports.

We have not doubt that MSI will add more AM5 models to its US store after Zen 4 releases to retail, if not before then. So, stay tuned.