You don't actually need to be a god (or like a god) to own MSI's new flagship motherboard, the MEG Z690 Godlike (the same that appeared in a photo shoot two months ago), but you will have summon a large bag of cash. Going all out on this bad boy will set you back a cool $2,099. However, that's really a bundle price that also includes MSI's MEG CoreLiquid S360 all-in-one liquid cooler and a 32GB kit of Kingston Fury Beast DDR5 RAM.
Still, it's an expensive board and package, and that's because you're paying a premium for every bell and whistle MSI could cram on this thing. At its base, this is built around Intel's Z690 chipset for Alder Lake with an LGA 1700 socket and four DDR5 DIMM slots. But that's like describing a Ferrari as a car with an engine and tires.

"Godlike's number one goal for the end-users is evident, designed for the best performance and experience enabled by truly remarkable systems. Whether it’s record-breaking overclocking, ultra-customization of ARGB lighting with touch control LCD dashboard, or simply the desire to build the most powerful system imaginable, the MEG Z690 Godlike stands unrivaled at the pinnacle of all the Z690 motherboard capabilities," MSI says.
Most of the board is covered in a dark aluminum heatsink with a triangular grid pattern and distinct MSI design language elements (like the illuminated dragon nebula). Underneath it all sit dual cross heat-pipe connecting two MSO heatsinks, while a magnetic double-sided M.2 shield battles SSD thermals. 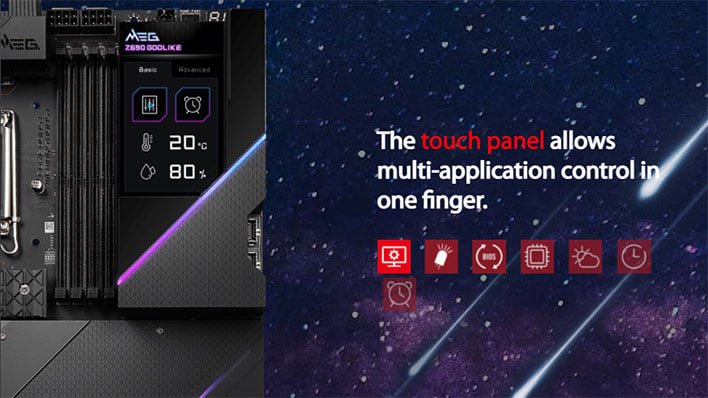 Perhaps the biggest standout feature, though, is the first 3.5-inch touchscreen IPS display mounted on a motherboard. You can use it for hardware monitoring and to display debug codes, among other things (it's customizable). And with touch support, you can use it to "fine-tune complicated PC settings, and even activate the Windows function," MSI says.
Note that this is a large motherboard built around the Extended ATX (E-ATX) form factor, so it's not going to fit inside a regular ATX case. You need to come big with this one. Other specs and features include...
This is a board that is built to handle the rigors of extreme overclocking. It sports an 8-layer PCB with 2-ounce thickened copper, and a power system with direct 20+2 phases with a 105A smart power stage, Titanium Choke II, and dual CPU power connectors.

MSI says the MEG Z690 Godlike is available now, though we're not seeing it at places like Amazon and Newegg yet. In the meantime, you can register your interest in MSI's website.