Intel and NVIDIA may not see eye-to-eye on Moore's Law, but that doesn't mean the two don't pair well together, in terms of hardware combinations. As such, MSI is rolling out a high-powered gaming desktop that pairs flagship components from both companies—an Intel Core i9-13900K processor based on Raptor Lake and a GeForce RTX 4090 based on Ada Lovelace.
Fully configured, MSI's new MPG Infinite X2 desktop figures to be a massively powerful PC for gaming, content creation, and whatever else someone might be inclined to throw at it. Less powerful (and more affordable) CPU and GPU combinations will be offered as well, though MSI isn't offering up what those component options will be just yet.
Beyond the raw horsepower made available by pairing the fastest parts on tap from Intel and NVIDIA, there are a couple of curious design decisions. One of them is the motherboard. MSI is opting for a motherboard based on a last-generation Z690 chipset rather than one based on Z790, which Intel launched alongside its 13th Gen Core processors.
At least they're similar, as Z790 is essentially a revised version of Z690 with more PCIe 4.0 lanes from the chipset (20 versus 12), albeit fewer PCIe 3.0 lanes (8 versus 16). It's also notable that Raptor Lake bumps up official DDR5 memory support to 5,600 MT/s versus 4,800 MT/s for Alder Lake.
This brings us to the other curious design decision—the MPG Infinite X2 can be configured with up to 128GB of DDR5-4400 memory. That's less than exciting, given that much faster DDR5 kits are available, some of which top 7,000 MT/s.
To be fair, most people probably wouldn't notice a difference outside of scrutinizing benchmarks, and we presume this was done to keep costs down. Still, it would have been nice if MSI opted for faster memory and, to a lesser extent, Intel's latest chipset. 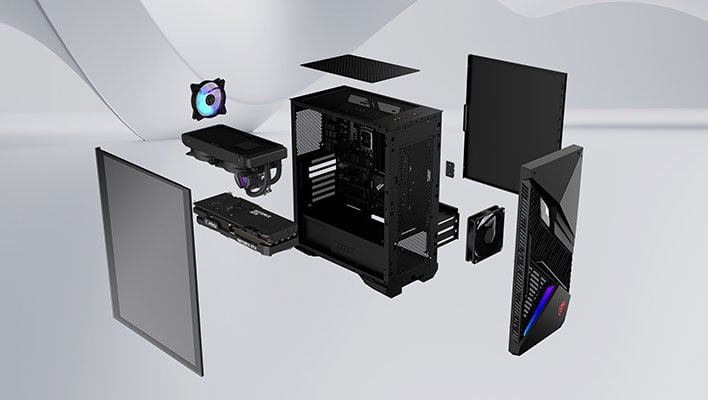 Moving along, the desktop features four M.2 slots (2x PCIe Gen 4 x4, 1x SATA/PCIe Gen 3x4 combo, 1x SATA PCIe Gen4x4 combo), along with two 2.5-inch drive bays and two 3.5-inch drive bays to flesh out your storage scheme.
Front and rear connectivity look like this...
Front
Rear
Other features include a 1,000W power supply, a tempered side glass panel to show off the internals, customizable RGB lighting, a 240mm all-in-one liquid cooler for the CPU, and a VGA holder to prevent the graphics card from sagging.
MSI has not yet announced when its MPG Infinite X2 desktop will be available or how much it will cost.