G.Skill And ASUS Light Up Intel Raptor Lake With DDR5 Clocked At A Sizzling 10GHz On Air

Back in late January, G.Skill and ASUS celebrated setting a world frequency record with a Trident Z5 memory kit running at 8,888 MT/s. At the time, the memory kit needed to be drenched in liquid nitrogen (LN2) to achieve the high-speed result. Now just over nine months later, G.Skill and ASUS have teamed up to break the 10,000 MT/s barrier, and they did it without using LN2 or any other exotic cooling.
They didn't even need to implement liquid cooling, as DDR5 has been rapidly maturing. Instead, using only air cooling, G.Skill and ASUS showcased the former's 16GB DDR5-8000 memory module (part number F5-8000J3848G16G) overclocked to DDR5-10000 in the latter's ROG Maximus Z790 Apex motherboard, with an Intel Core i9-13900K Raptor Lake processor riding shotgun. 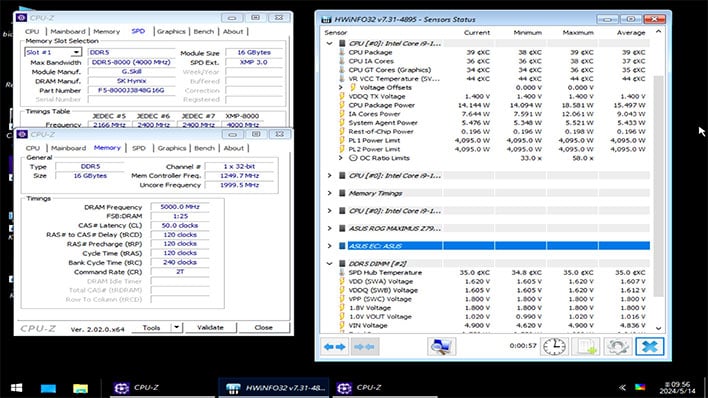 "Along with the latest release of the 13th Gen Intel Core desktop platform, ASUS and G.Skill worked closely to achieve an astounding DDR5-10000 overclocked memory speed in single-channel operation, using only air cooling for the CPU and DRAM module," G.Skill said.
Therein lies the caveat—while no exotic cooling was needed, the blistering speed was achieved on a single 16GB memory module rather than using both sticks a dual-channel 32GB (2x16GB) DDR5-8000 Trident Z5 RGB memory kit. 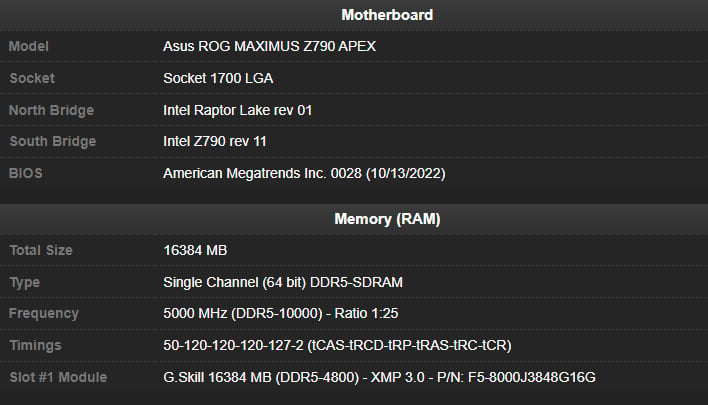 Nevertheless, this is an impressive achievement, especially considering that DDR5 is still relatively new. Alder Lake was the first consumer platform to introduce support for DDR5, followed by AMD's Zen 4 release and Intel's Raptor Lake launch. Now that both AMD and Intel have embraced DDR5, we suspect the memory standard will mature even faster than it already has up to this point.
A DDR5-10000 memory kit is what we've all been waiting for. In the meantime, G.Skill is hyping some juicy bandwidth numbers from its DDR5-8000 kit, which at stock settings has been shown to top 124GB of read performance and 120GB/s for writes. Good stuff.