Depending on who you ask, Moore's Law is either dead and obsolete (NVIDIA) or the decades-old observation laid out by Intel co-founder Gordon Moore is alive and well (Intel), and will continue to thrive into the future. The latter opinion is that of Intel CEO Pat Gelsinger. It's also not a new one, but in a post on his LinkedIn page, Gelsinger doubles down on the relevance of Moore's Law and how maintaining it requires rebooting the foundry model mindset.
"Since our founding, Intel has thrived on the relentless pursuit of semiconductor invention and innovation as described by Moore’s Law. It has provided the technological backbone behind the greatest period of human innovation and wealth creation in history—and we are still right in the thick of it," Gelsinger states.
Moore's Law is nuanced, but generally speaking it dates back to a prediction Moore made in 1965 and then revised a decade later. Initially, he predicted that the number of transistors in a circuit would double every year, which they did. Then in 1975, he amended his observation to every two years, and according to Intel, this is what "set the pace for innovation and development" for the past 50+ years. 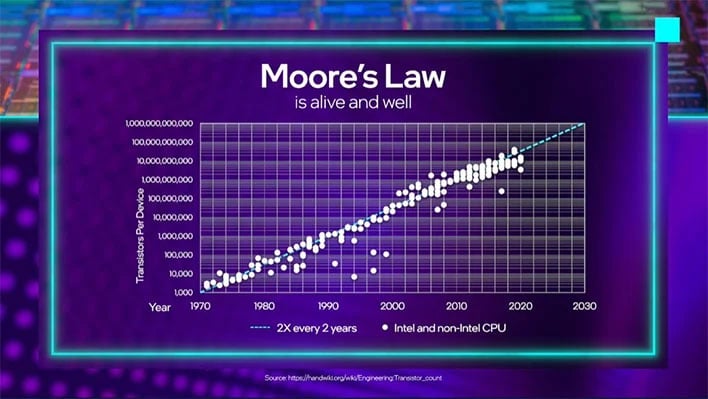 A broader overview would get into the economics, increases in computing power, and other facets of his prediction. But at its core, Moore's Law is about scaling down at a rapid pace.
The problem—or challenge—is that after several decades of cramming more transistors into smaller areas, the physical limits of silicon have come into view. Today's computer chips are exponentially more sophisticated and intricate to manufacturer.
"Silicon is magic; it’s a super versatile element with all the right properties for transistor needs. As we continued to scale down over the years, as prescribed by Moore’s Law, we’ve added additional elements into the mix – creating sophisticated silicides for transistors, and back end of line metallization schemes," Gelsinger explains.
"Today, our end-products include around a quarter of the periodic table. More are used in processing and manufacturing—up to a third of all the elements. We still have tremendous opportunity for the future—perhaps looking at 2D materials or novel types of dielectrics," Gelsinger adds.
Gelsinger reiterated that Intel will exhaust the periodic table to maintain Moore's Law, adding that today's products use around 25 percent of it. But if Moore's Law is truly to remain relevant, advances in chip packaging will play a critical role. And that's a key part of what he describes as a rebooted foundry mindset. 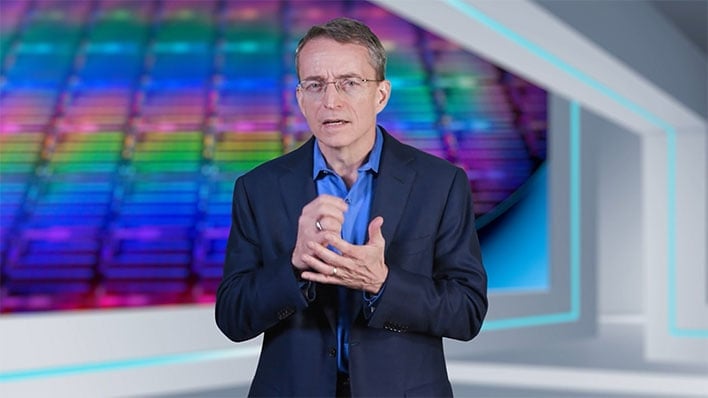 More recently, there has been an increased push towards 3D stacking technologies, as well as chiplet solutions. It's not just Intel, either. To wit, AMD this week unveiled its Radeon RX 7000 series based on RDNA 3, which it is touting as the world's first chiplet-based gaming GPU architecture.
"Moore’s Law enabled us to build more complex systems amid growing demand for applications specific compute. Yet Gordon himself understood the importance of packaging and said as much in his original paper. He was able to foresee this day of 'reckoning', where it would be necessary to build larger systems out of smaller functions to deliver customized heterogenous solutions," Gelsinger says.
Gelsinger also talks about software's role in rebooting the foundry model mindset. What he doesn't address in its LinkedIn article is how all this coexists with Intel recently saying it was going into an aggressive cost-cutting mode. We'll have to wait and see.