If you are looking to build a PC around one of Intel's newfangled Alder Lake CPUs, it's Z690 or bust, as far as the motherboard platform goes. The vast majority of Z690 motherboards that are out so far cost north of $200 (some are far north). That's not unexpected given that Z690 is a top-tier chipset, though if you're looking for a more affordable route into Alder Lake territory, hang tight because B660 is likely right around the bend.
Evidence of this can be found in a supposed leaked price list of several MSI B660 motherboards. Assuming the price list is actually real, MSI will introduce at least ten B660 motherboards in the not-too-distant future, with MSRPs dipping down as low as $119. The price list outlines a handful of options that will cost less than $200. 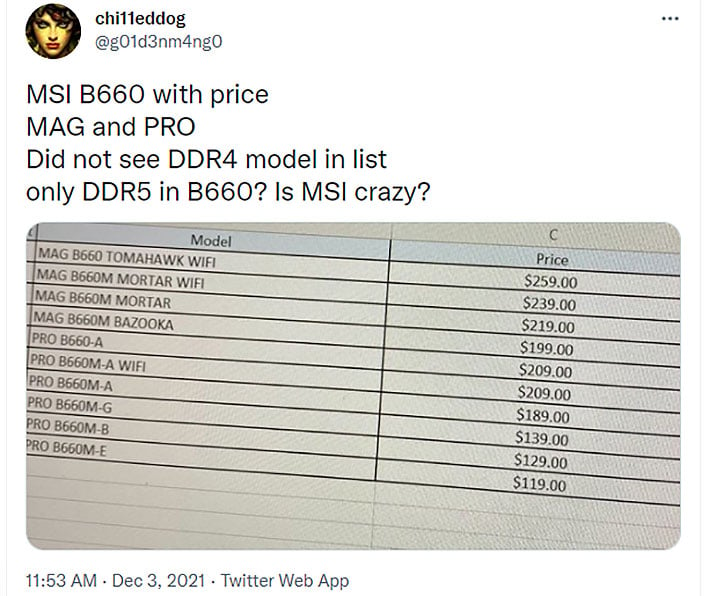 The leaker isn't super active on Twitter, though they did post information about MSI's Z690 Godlike motherboard before it was announced. So draw your own conclusion on the validity of the above MSI B660 models and price list.
These are said to all be DDR5 motherboards. We'd be a little surprised if MSI didn't flesh out its lineup with DDR4 options, particularly given the cost premium and relative scarcity of DDR5 memory compared to DDR4 RAM. But of course we'll have to wait and see.
If the price list is real, MSI will unveil four MAG models and six Pro models as part of its B660 lineup. Here is what we are looking at (in case you can't see the above list for any reason)...
The least expensive option among the bunch is the MSI Pro B660M-E for $119. On the CPU side, the least expensive Alder Lake chip thus far is the Core i5-12600K, which retails for $299. So between the two, you'd be looking at around $418 before factoring in RAM. Of course, more Alder Lake desktop CPUs will eventually arrive as well.
One thing we're curious to learn is whether or not the B660 chipset will embrace PCI Express 5.0. This became a question last month when a reviewer alleged received an ASUS Prime B660 - Plus D4 retail box, which indicated that it supported PCIe 4.0. Cross your fingers that we will find out soon.