The only chipset that's been announced for Intel's 12th Gen Core Alder Lake processors so far is Z690. Intel is getting things started at the high-end, with Z690 supporting all the newfangled technologies that Alder Lake is embracing, and especially DDR5 memory and PCI Express 5.0. But what about the rest of the stack? It's possible that Intel's more mainstream chipsets will stick with PCI Express 4.0 for another round.
Nothing is for certain, but assuming Intel follows its own precedent, at minimum there will be H670, B660, and H610 chipsets added to the mix to address the home consumer market. What makes this is a unique launch that leaves some things up to guesswork is that Alder Lake is a major shift in design, with multiple technology upgrades coming along for the ride.
Here's where things get interesting. The folks at Videocardz posted a photo of an ASUS Prime B660-Plus D4 motherboard label, and it clearly indicates PCIe Gen 4 instead of PCIe Gen 5. Have a look... 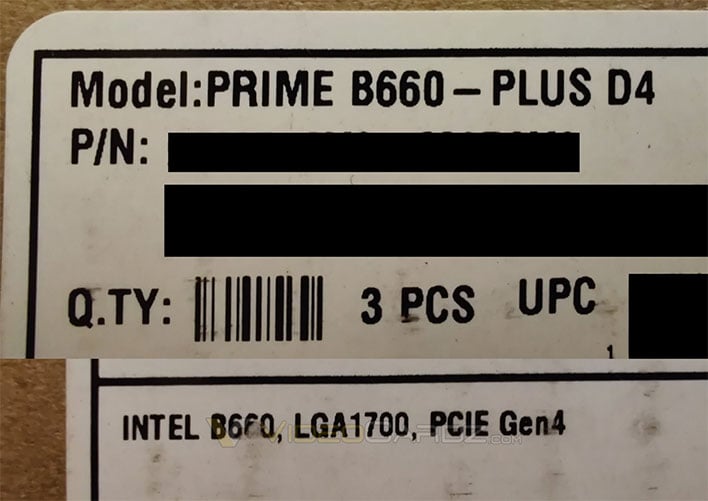 As the story goes, an unnamed reviewer received a Z690 motherboard from ASUS, but it was purportedly shipped in the wrong packaging. In doing so, ASUS may have tipped Intel's hand for what's in store for its mainstream B660 and entry-level H610 chipsets, neither of which have been announced. If the packaging label is accurate, one or more likely both with either not support PCIe Gen 5, or optionally support it.
This could also be something that is unique to ASUS, or the sticker could be from an early prototype. It could also be a typo, or even a hoax. That's to say, don't carve it in stone that mainstream Alder Lake motherboards will not make the leap to PCIe Gen 5.
What also makes this interesting is that Alder Lake desktop CPUs offer 16 lanes of PCI Gen 5 (and four lanes of PCIe Gen 4) right off the root CPU complex, not the PCH (Platform Controller Hub), which itself throws another 28 lanes of PCIe 4 and PCIe 3 into the equation.
This raises the question of why mainstream and entry-level chipsets wouldn't support PCIe 5, and assuming that's even accurate, the answer might be that it's no big deal. It still remains to be seen what actual performance benefits users will glean from PCIe 5, as the PCIe bus hasn't exactly been a bottleneck for gaming GPUs, and PCIe 4 SSDs like Samsung's 980 Pro are incredibly fast already.
Regardless, this could be a separating factor between Z690 and chipsets that sit further down the stairs. it will also be interesting to see what Intel has in store for its mid-range H670 chipset—we assume it will support PCIe Gen 5, but only Intel knows for sure. For now, the leaked ASUS B660 label raises more questions than it answers.