Motorola has been on roll when it comes to its latest budget smartphones. Just within the past week, the company announced the One 5G with a 90Hz display, 5,000 mAh battery, and 5G connectivity for under $500. Now, the company's latest budget device, the Moto G9 Plus, has seen its specs leaked to the internet for all to see courtesy of wireless carrier Orange Slovakia.

Orange indicates the Moto G9 Plus is equipped with a 6.81-inch FHD+ display (2400x1080) along with 4GB of RAM and 128GB of internal storage. If 128GB isn't enough for you, you'll be happy to know that Motorola has included a microSD slot for further expansion. Although not confirmed in this most recent specs dump, the Moto G9 Plus is rumored to feature a Qualcomm Snapdragon 730G SoC (as seen in the Pixel 4a). 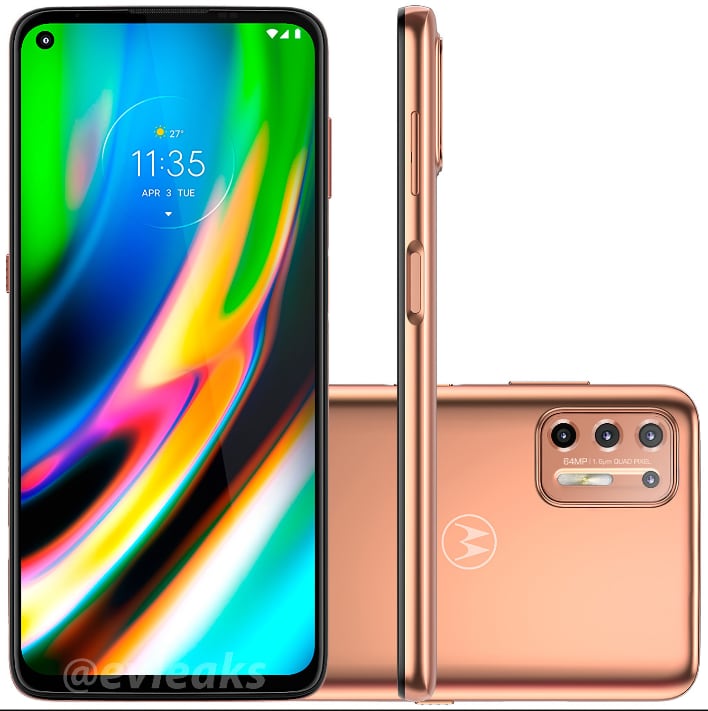 There is a single hole punch selfie camera up front in the top left corner of the display, while four cameras can be found on the back (including a 64MP primary sensor). On the right-hand side of the smartphone we find a volume rocker and a power button about mid-way down. The power button doubles as a fingerprint sensor, which precludes the need for a more expensive in-display option.

But perhaps one of the most important specs for the smartphone -- especially for emerging markets -- is its battery. The Moto G9 Plus is rocking a large 5,000 mAh battery, which combined with the miserly Snapdragon 730G should allow for some pretty long runtimes between charges.

If the Orange product page is indeed accurate the Moto G9 Plus will be priced at €255, which should covert to around $300 for the U.S. market if it ends up getting released here.