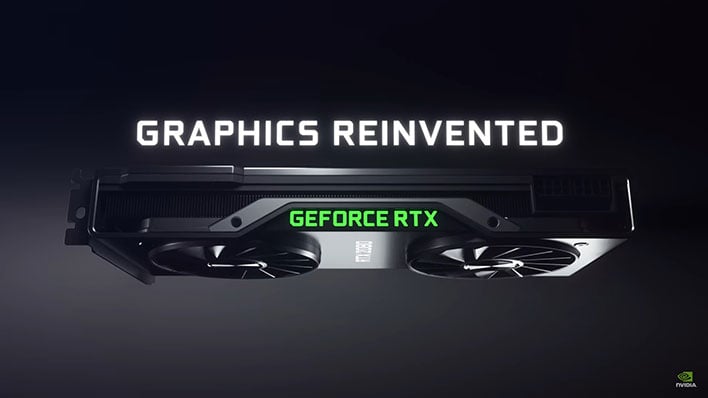 Between all the accidental leaks and myriad rumors surrounding NVIDIA's Ampere architecture and GPUs, there may not be much left to reveal by the time any next-generation graphics cards ship. This time we've got a spicy selection of specs and photos regarding what should be the company's top-end GPU, rumored to be called the GeForce RTX 3090.

It all started with a photo posted by a supposed anonymous leaker who goes by the name Yuuki_AnS. If the phrase "supposed anonymous leaker" sets off alarm bells in your head, don't worry; we're right there with you. At any rate, the photo shows an alleged GeForce RTX 3090 board with supposedly 12 memory modules for a whopping 24 GB of GDDR6X memory. Since that memory configuration lines up with what Micron already confirmed this week, it seems reasonable. A configuration of 12 chips would mean 16 Gigabits (2 GB) a piece, which is more dense than GDDR6 on most current cards.

If you're like us and counted the chips around the GPU die, there's only 11 visible. In an annotated version of the image obtained by VideoCardz, the twelfth module is obscured by another PCB which is also sitting over the PCI-Express connector along the card's edge. That pixelized mosaic effect on the left appears that it actually part of the PCB, as we can clearly see that the card overlaps that section at the bottom. That needs to be true for this image to be legit, but there appears to be ample room between the GPU and the PCI Express connector for this to be the case. 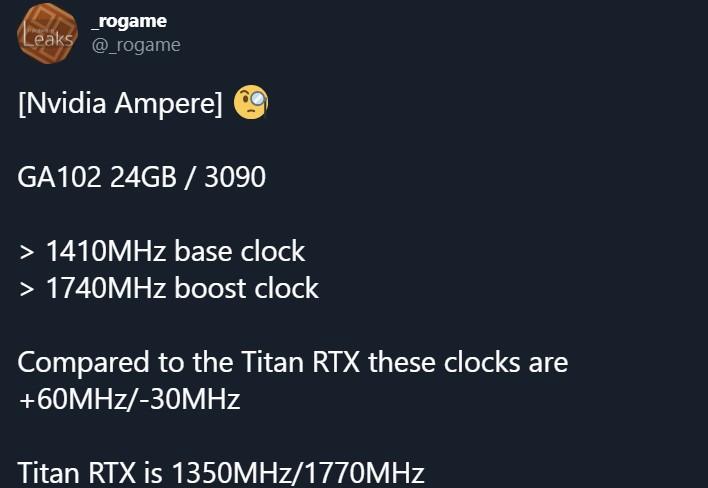 That's not all we think we know about Ampere, however. A leaker with a good track record, _rogame on Twitter, has apparently leaked base and boost clocks for the biggest Ampere card. The GA102, which should be the largest consumer-facing GeForce RTX 3000 series GPU, will apparently have a 1,410 MHz base clock and 1,740 MHz boost clock. That seems pretty reasonable to us, since we expect that NVIDIA is focusing more on increasing the resource count with the move to TSMC's more advanced manufacturing processes.

Interestingly, that's down a bit on the base clock from _rogame's previous predictions in July, but not by much. It's also not all that far off the official base and boost clocks of the Titan RTX, which NVIDIA's listing shows as 1,350 MHz base and 1,770  MHz on the boost. We're looking at just a couple percent higher base clocks and a slightly lower boost clock. This same Twitter account correctly predicted AMD's Ryzen Pro 4000 Renoir CPUs, so we think this has a good chance of panning outt.

We're eager to get our mitts on the GeForce RTX 3090 (or whatever this card happens to be called) and put it through its paces. We're only about 16 days away from a big NVIDIA announcement, according to the official GeForce Twitter account, so stay tuned!