Last year, 5G availability and performance was disappointing, and realistically not much has changed on that front. Apple touted "5G just got real" when the iPhone 12 family launched, but 5G tended not to be much better than 4G, if at all. Either way, the technology is still improving, and has more widely rolled out, so improvements are to be expected nationwide. Ookla has released its Q4 findings for mobile networks, and we get to see how the competitors stack up. 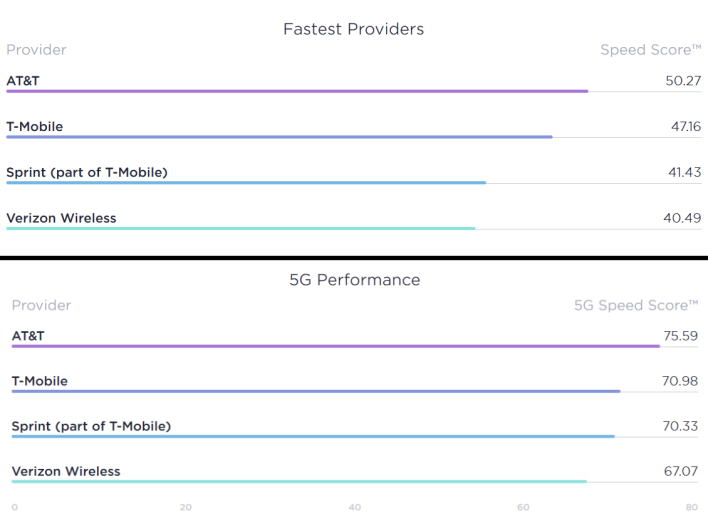 The biggest surprise is Verizon taking last place in the two most important categories, but that is to be expected. In the 5G sector, Ookla cites the fact that Verizon's network "expanded dramatically over the past quarter, a process that included using dynamic spectrum sharing (DSS) to expand from mmWave-only to sub-6 GHz 5G and the addition of many new users over a broader footprint — both of which tend to bring down average performance." Overall, though, it is a neck-and-neck race again, so a slight difference shown in the scores should not be noticeable.

Finally, as we did mention Apple's "5G just got real" slogan, the company deserves a little bit of credit. In Q4 of 2020, Apple commanded the top five spots on Ookla's list of the US's most popular devices. These devices also had a slightly higher median download speed with around 7 to 12Mbps more than Samsung's Galaxy Note20 Ultra.

Overall, it is nice to see 5G improve, but on the contrary, it isn't very reassuring to see it happening so incredibly slowly. Whatever happens, it will be some time before 5G is genuinely "real" for most people, but if you have it and use it, let us know what you think in the comments below.