Hey, good news everyone, 5G has arrived and every major carrier in the US offers it, to some extent. Pop the champagne, right? Not so fast. Why? Because the 5G we are getting is, by and large, not so fast compared to what has been hyped. That is true even of Verizon's 5G network, despite its collaboration with Apple touting "5G just got real" with the roll out of the iPhone 12 series.
5G will eventually get us to the Promised Land of game-changing connectivity. But as it stands, 5G speeds in many parts of the country are not blowing away what people are already getting on 4G networks. That is because when it comes to 5G, it is all about the spectrum and frequency bands. The fastest 5G speeds right now come by way of a technology called millimeter wave, or mmWave, and that is what Verizon initially offered.
By diving headfirst into mmWave, Verizon could boast the fastest 5G speeds in the nation, substantiated by speed tests run by Ookla. But while mmWave is very fast, it is not able to travel long distances, and has trouble penetrating objects. This means the full benefits of mmWave can only be realized in certain locations.
Meanwhile, other wireless carriers were focused on fleshing out their 5G networks with lower and mid-band spectrum. Speeds are not as fast, but lower and mid-band spectrum can travel further and more easily penetrate objects.
This is where things get interesting, and unfortunately sobering for Verizon. It was only last month when Verizon began offering low-band 5G, resulting in its average 5G download speed going from first place to last place among the major wireless carriers in the US. 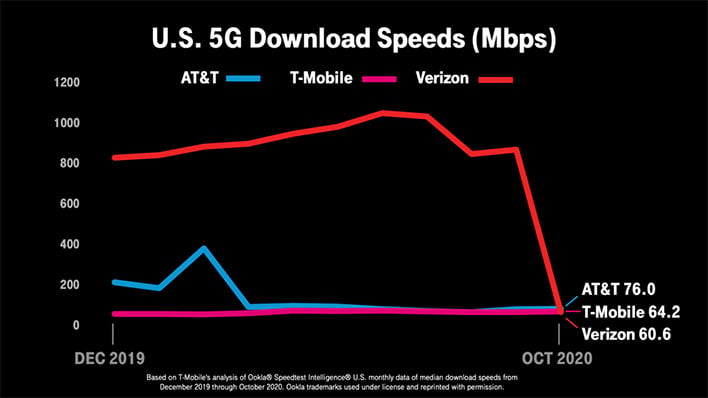 The folks at PhoneArena say they have exclusively obtained the latest average 5G download metrics from Ookla, and in the graph they put together, you can see Verizon's sharp plummet after it flipped the switch on low-band spectrum.
Prior to that happening, Verizon's average 5G download speeds were between around 800Mbps and 1,000Mbps, dating back to December of last year, according to the data. And now? Ookla's research shows Verizon's average 5G download speed is 60.6Mbps when including low-band spectrum into the mix. That is slightly below T-Mobile at 64.2Mbps, and more than 20 percent slower than AT&T at 76Mbps.
That said, the ranking does not really matter a whole lot, as the difference in real-world experiences at 60.6Mbps and 76Mbps is not going to be drastic in most cases. But what this highlights is that despite claims to the contrary, 5G did not just get real. It's only getting started, and faster experiences that deliver on the true promise of 5G are still off in the distance. 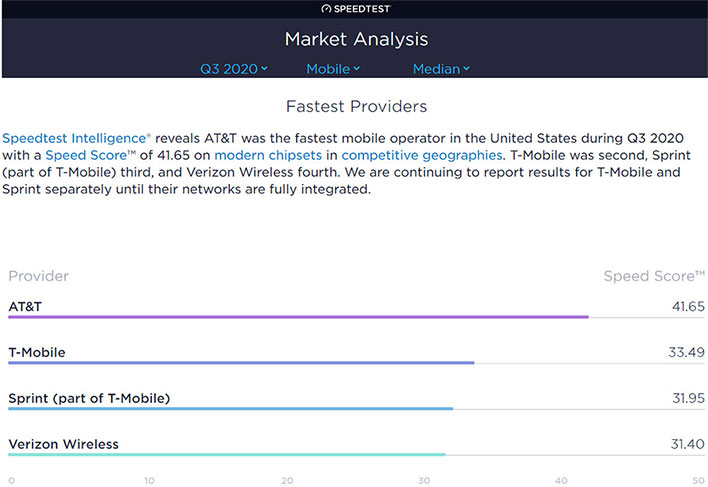 5G aside, Ookla's research also shows Verizon is actually the slowest mobile operator in the US. According to Ookla, mobile download speeds on Verizon's network as a whole averaged 31.4Mbps, whereas AT&T again took the top spot at 41.65Mbps.
What does this all mean? Simply put, there is a gap between what is marketed and what is actually being offered. And it is not just Verizon, either. It was not that long ago when AT&T was promoting "5G Evolution" or 5G E, which was basically just an enhanced version of 4G LTE. Savvy users knew better, but for the average person, wireless connectivity standards can be confusing.