It has been quite the busy month for customs authorities in China. In two separate incidents, agents seized thousands of improperly labeled XFX-brand graphics cards worth millions of dollars and 160 Intel Alder Lake processors as multiple individuals seemingly tried to avoid paying custom fees (or, in the case of the mislabeled GPUs, pay a lower rate).
Starting with the graphics cards, a video released by Shenzhen Meilin Customs and Huanggang Customs shows a joint inspection of boxes filled with graphics cards at the Huanggang Port in Shenzhen. Officials noticed that a few of the card labels had been covered with different ones and decided to take a closer look. In doing so, they found that 5,840 graphics cards worth north of $3 million had labels that did not match the declaration of the true value.

A report by MyDrivers suggests that XFX may have been trying to take back graphics cards used by miners and then sell them as new again. This could explain why the boxes were mislabeled, as opposed to outright trying to avoid the full customs fees. However, XFX posted a response denying the allegation, calling it "false news" and saying in no uncertain terms that "there is no 'mining card refurbishment' and 'second sales' behavior" taking place, at least not with its knowledge.
If XFX is being truthful, then there is obviously some other explanation as to why thousands of graphics cards were wrongly labeled. Interestingly enough, XFX's site in China was temporarily shut down following the incident. 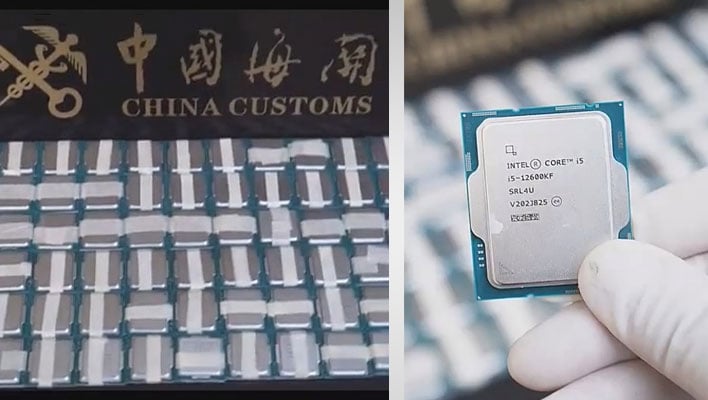 In a separate incident, customs officials noticed an individual whose "walking posture was abnormal" as he attempted to enter the country through a 'no-declarations' portal. They stopped the individual for a closer inspection and discovered 160 CPUs and 16 folded mobile phones taped to his waist, abdomen, and the inner side of his calf.
"At present, the case has been further processed in accordance with relevant regulations. The customs reminds that the luggage items that individuals bring into and out of the country should be limited to their own use and a reasonable amount, and they should be subject to customs supervision," the customs agency said.