Minisforum has launched yet another mini PC, but this one breaks the mold with a whole new design and becomes the foundation of the firm’s Mars series. At first glance of the Minisforum MC560, you might think it is a new smart speaker for Amazon Alexa or Google Nest homes. However, the MC560 is a fully fledged PC with an AMD Ryzen 5 5600U 6C/12T APU at its heart, support for up to 64GB DDR4 RAM, an M.2 PCIe 3.0 NVMe SSD, and plenty of connectivity options. Beneath the 2.5k QHD HDR webcam at the top of the diminutive tower, and under the grille, Minisforum has installed some stereo speakers, to make this an interesting and quite unique proposition.
In our headline, we make reference to the work from home (WFH) enhancing qualities of the Minisforum MC560. The camera is better than many you will find in laptop designs. Key specs of the camera are that it offers a QHD image (which we assume to be the same as a QHD monitor at 2560 x 1440 pixels). It is claimed to offer HDR color, and it has a field of view of 93.8°. Users can tilt the camera by up to 10° to make it easier to position the MC560 for teleconferencing. 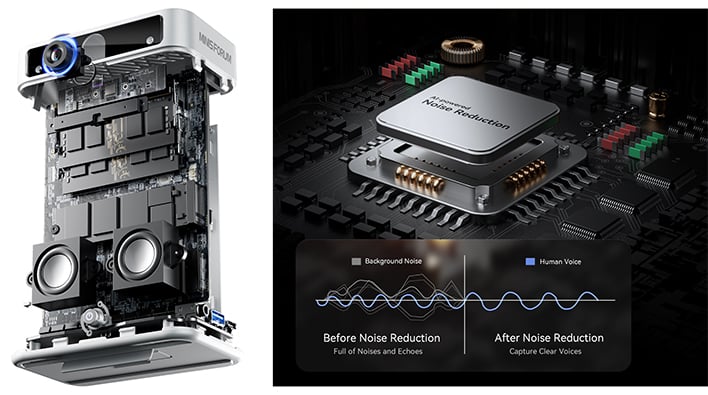 A practical teleconferencing machine also requires decent microphones. Minisforum says its MC560 features 180° dual beam-forming microphones for accurate and clear directional speech capture with AI noise cancellation functionality. Rounding off this aspect of the mini PC’s design, the built-in dual speakers mean this is a ready to go system for teleconferencing and WFH with minimal setup, and what look like capable specs, on paper.
As a mini PC, measuring just 4.2 x 2.7 x 6.0-inches (approx 105 x 70 x 150mm), this device isn’t going to be a slouch, either. Bear in mind that it uses one of AMD’s lower power APUs, a 15W model meant for portables, but it still has decent specifications such as 6C/12T processing, clocked at 2.3 GHz base to 4.2 GHz turbo, with 16MB of level 3 cache. For light-ish 3D acceleration in applications and games, the APU integrates Radeon RX Vega 7 GPU, with 7 CUs running at up to 1.8 GHz.
Before we get onto the provided port selection, it is worth mentioning that this sounds like another optionally barebone or fully configured unit from Minisforum, by the way it explains you can configure up to 64GB of DDR4-3200 memory, and there is an M.2 slot for PCIe 3.0 NVMe SSD storage. Wireless connectivity is afforded by the built-in Wi-Fi 6e, and Bluetooth 5.2. 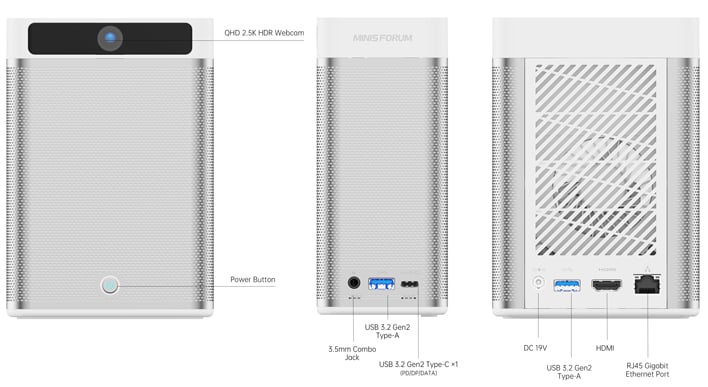