Micron announced that it is shipping the world’s first client SSD using NAND flash with over 200 layers. The Micron 2550 NVMe SSD uses 232-layer TLC NAND, which the company says benefits consumers through density and power advantages.

The Micron 2550 SSD is rated for sequential reads and writes of up to 5.0 GB/s and 4.0 GB/s, respectively. Random reads are rated up to 550K IOPS and with random writes up to 600K IOPS. This is solid PCIe Gen4 class performance, though higher-end drives can achieve speeds of 7 GB/s and beyond. The Micron 2550 SSD is targeted at mainstream PC platforms in the gaming, consumer, and business class markets. 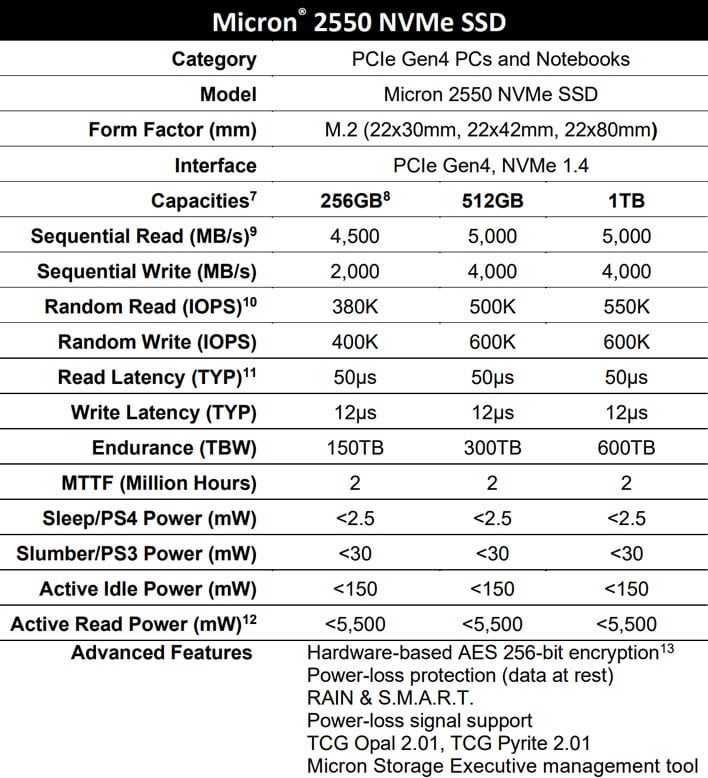 Micron says the 2550 SSD consumes just 2.5 milliwatts during sleep, with active idle power consumption staying below 150 milliwatts. Under load, power consumption can reach up to 5.5 watts, which is fairly typical for NVMe SSDs. Drives spend most of their time in an idle state, so those advances are still expected to bring tangible benefits to the battery life of laptops or convertible tablets that may incorporate the drives.

To further reduce power consumption, the Micron 2550 SSD forgoes a DRAM cache in favor of Host Memory Buffer technology. HMB shifts the I/O caching responsibility onto system memory, but typically in only very small amounts. As a result, it shouldn’t impact system performance in any negative way while still accelerating most read/write operations. The HMB is supplemented by an SLC cache region. Micron applies its Predictive Cache Optimization to position the most active data in this portion of the drive as much as possible.

“We expect PCIe Gen4 drives will remain the primary interface for notebooks and desktops into 2026,” said Greg Wong, principal analyst at Forward Insights. “Leading-edge Gen4 SSDs, such as the new Micron 2550, deliver improved user experiences and provide OEMs with an attractive storage solution for their system designs.”

Micron has provided some real-world benchmark figures along with the announcement. Using PCMark 10, Micron claims the 2550 SSD “transfers files 112% faster, runs office productivity applications up to 67% faster, loads major games up to 57% faster, and runs content creation applications up to 78% faster than comparable competing products.”


The Micron 2550 SSD is being sold directly to OEMs for incorporation in systems. It will be available in 2280, 2242, and 2230 form factors to fit a range of designs. The drive is launching with capacity options of 256GB, 512GB, and 1TB. The 512GB and 1TB models retain similar performance, with only the random read rating of the 512GB model reduced by 50K IOPS. The 256GB model sees more of a performance hit, as shown in the chart above, which is typical of lower capacity drives. Micron indicates that we can expect to see higher capacity 232-layer drives emerge in QLC-equipped models next year.