Our universe is beautiful. Thanks to both Hubble, and the James Webb Space Telescope we know of the unending beauty that exists not only in our galaxy, but far beyond. One creative gamer decided to capture this beauty in an amazing way -- within Minecraft.

User u/ChrisDaCow in the subreddit r/minecraftbuilds has shown that he has the creativity, time, and patience, to recreate some of the beautiful imagery that we've managed to see through the lenses of those space telescopes. 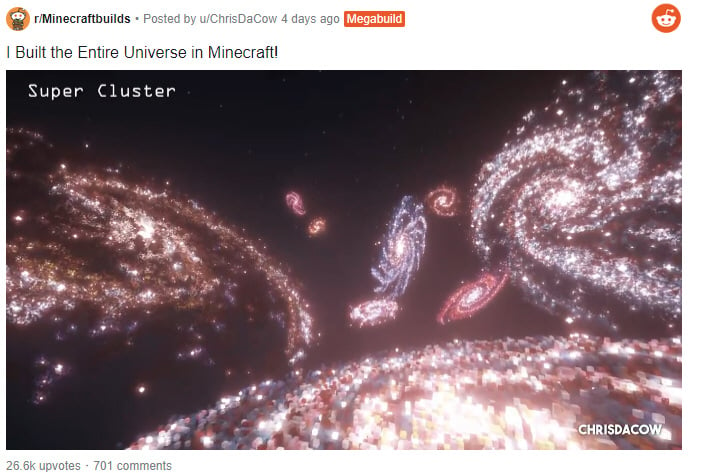 The visual landscapes, and even accuracy to certain things we have familiarity with, like our own blue marble, is also extremely impressive. Chris' 40-second video showcasing his work provides a representation of our own solar system, including our Sun, Earth, the Moon, Saturn, Neptune, and other planets. It also includes what is known as the supercluster of galaxies, a nebula, and a black hole. It even has a spherical representation of the entire known universe!


While he has been asked a number of times, Chris has decided not to share how long it took him to build this amazing model. It is likely that specialized software and images were used to generate some things, but that does not make this feat any less impressive. The creator likely spent many hours of referencing photos, moving single blocks to just the right position, and fine tuning a multitude of other things. Much time was probably spent making sure the right day/night cycle in the game was correct for taking video and photos of the completed project, just to make the video. 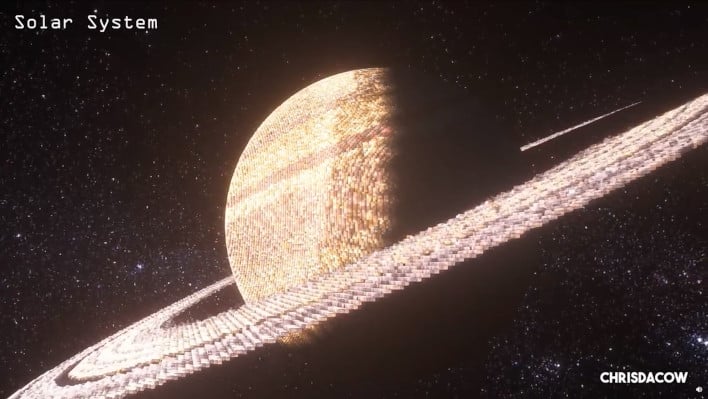 Representation of Saturn within Minecraft

We called Minecraft one of the most addicting PC games of all time about a decade ago! We can't be alone based on the number of massive and impressive projects that continue to utilize Minecraft. There's a Minecraft server dedicated to building the world of Westeros from Game of Thrones known as WesterosCraft. There are builders who have built relatively accurate representations of Hogwarts from Harry Potter. There are even computing modules, which have allowed users to go as far as building Minecraft inside Minecraft.  With that, we have to say, good job to ChrisDaCow, and we look forward to whatever else he can showcase in the future!