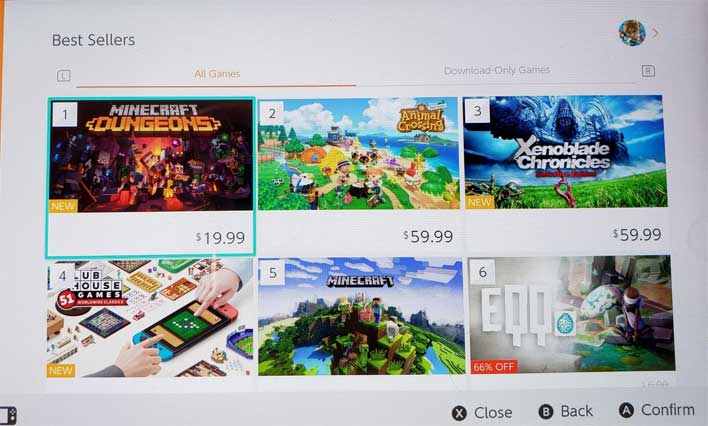 During the COVID-19 outbreak around the globe, many people have turned to video games to pass the time. The top video game on the US eShop for the Nintendo Switch since March has been Animal Crossing: New Horizons. However, New Horizons has now slipped to the second-place spot, replaced as the top-selling game by Minecraft Dungeons.

Minecraft Dungeons is proof that the Minecraft franchise remains extremely popular with gamers of all ages. The top five video games on the Switch eShop in the US are:

Certainly, one of the things that helped Minecraft Dungeons do so well on the Switch and other platforms is its price. At $19.99, it's significantly cheaper than most AAA video games. New Horizons, for instance, sells for $59.99 as do most new AAA games. For those unfamiliar with Minecraft Dungeons, it's a dungeon crawler developed by Mojang Studios and Double Eleven that's distributed by Xbox Game Studios.

Animal Crossing New Horizons had been #1 since early March. That's 3 months of dominance

As we are seeing on Xbox, Minecraft Dungeons is performing very strong, and is now #1 on Switch pic.twitter.com/JX5e01brN2

Minecraft Dungeons is available on the Switch, PlayStation 4, Windows PC, and Xbox One. It's described as an action-adventure game where players can fight through dungeons on their own or team up with up to four other players online or via co-op. Unlike traditional Minecraft, there is no building in Minecraft Dungeons.

The original Minecraft game is still a top seller on multiple platforms despite having launched way back in 2009. Part of the popularity for Minecraft is that it's more than a video game played for fun; it's also used in schools as an educational tool. During the coronavirus pandemic, Microsoft has offered free Minecraft educational content to kids learning from home. Another game in the Minecraft franchise is NVIDIA Minecraft RTX, which has improved lighting and visuals for PC gamers.