Although it's not a complete redesign of its popular 2-in-1 convertible, Microsoft today announced an extension of its existing Surface Pro 7, and it's called the Surface Pro 7 Plus. At first glance, you might not really notice much going on with its design on the outside, but Microsoft has made some key changes inside that make the device more appealing to education and business customers.

For starters, Microsoft has performed a CPU upgrade across the board, adopting 11th generation Intel Tiger Lake processors. Base systems get the Core i3-1115G4, mid-range systems feature the Core i5-1135G7, and top-spec systems receive the Core i7-1165G7. The shift to Tiger Lake is partially responsible for boosting runtimes on the Surface Pro 7 Plus, which have been extended to 15 hours instead of 10.5 hours.

The other contributing factor to the increase in runtimes comes from a larger battery, which now has a capacity of 50.4WHr instead of a 46.5WHr. Another internal change comes with the standard SSD. Like the Surface Laptop 3 and Surface Pro X before it, the Surface Pro 7 Plus features a user-replaceable SSD. So that means if the standard 128GB SSD turns out to be too small for you down the road, you can upgrade to a larger SSD (up to 1TB) later down the road. 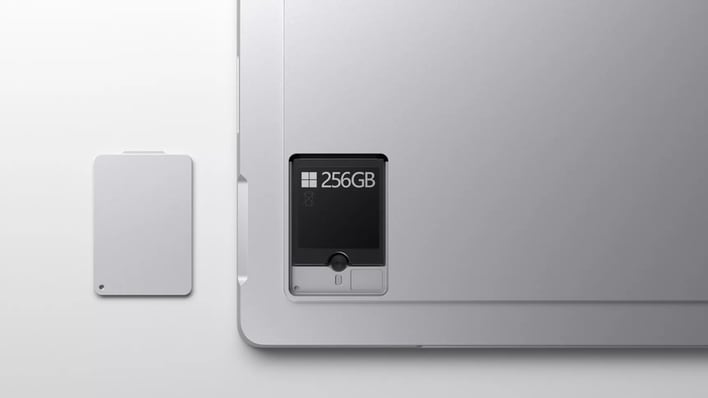 Most of the other specs should be very familiar to you, including the 12.3-inch PixelSense display along with USB-A and USB-C connectivity. There's also the requisite Surface Connect port for charging and connecting to a dock. Microsoft is even giving customers the option of selecting 4G LTE connectivity, but interestingly, it is only available on the mid-range Core i5 models. It's also quite odd that Microsoft is relying on the older Qualcomm Snapdragon X20 LTE modem instead of opting for the 5G-capable Snapdragon X55, but we digress...

The base system with a Core i3-1115G4, 8GB of RAM, and a 128GB SSD starts at $899, and priced start climbing rapidly from there. At this time, Microsoft is only making the Surface Pro 7 Plus available to corporate and education customers, although we're hoping that it extends that gratitude to regular consumer as well given the sweet upgrades.