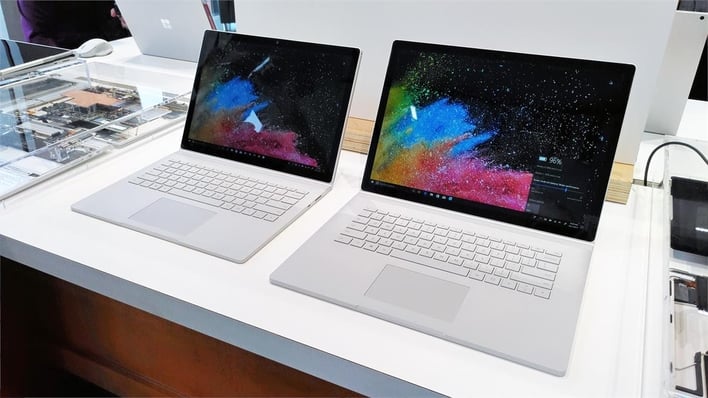 It's been over two years since Microsoft unveiled the Surface Book 2, and it looks as though the company is ready to move on with a new generation. The Surface Book 2 is running some seriously outdated -- by modern standards -- hardware including 7th generation Intel Core processors Pascal-based NVIDIA GeForce GTX graphics.

However, the next-generation Surface Book 3 is finally coming into focus thanks to 3DMark benchmark leaks. The listings were found by reliable leaker _rogame, who a number of configurations for the convertible. The first configuration features an Intel Ice Lake-based Core i7-1065G7 processor (4 cores/8 threads) and a GeForce GTX 1650 Max-Q GPU.

Another configuration pairs the same processor with a more performant GeForce GTX 1660 Ti Max-Q GPU. Interestingly, both of these are relatively low-powered CPUs with a 15W TDP. We're typically used to seeing Microsoft putting beefier processors in its Surface Book family of devices (which are available in 13.5-inch or 15-inch form-factors). We would have expected Microsoft to use something like Comet Lake in the Surface Book 3, or perhaps even Tiger Lake.

As to that last point, _rogame found another potential entry for the Surface Book 3 with Tiger Lake-U and a GeForce GTX 1660 Ti:

Don't rule out TigerLake for Surfacebook 3 just yet

Regardless of which processor Microsoft chooses for the Surface Book 3, the hardware update is long overdue. Microsoft’s Surface Pro and Surface Laptop families have received much greater attention over the past 2+ years with respect to hardware refreshes. Microsoft typically refreshes its Surface hardware in October, which is still 9 months away. If the Surface Book 3 is indeed coming with Ice Lake power, we could definitely see it launching sooner rather than later.

However, if Tiger Lake-U is in the cards, the October timeframe seems more in line with Microsoft's traditional Surface launch schedule.