Will Microsoft's Xbox Game Pass Service Ever Stream To PC And Consoles?

Microsoft has its hands full at the moment with its upcoming Xbox Series X and Xbox Series S launch, both of which are set to arrive next month. Be that as it may, there is a burning question some people would like answer—will Microsoft's Xbox Game Pass service ever support streaming to PC and console instead of just Android devices? Yes, as a matter of fact, it will.

Xbox Game Pass is a subscription service that has often been likened to a Netflix for games. Subscribers have unfettered access to a catalog of over 100 Xbox games from various publishers. The regular subscription price recently jumped to $9.99 per month (from $4.99 per month) because it exited out of beta, and perhaps to soften the blow, it now includes EA Play as well.
There is also a $14.99/month plan called Xbox Game Pass Ultimate, which adds Live Gold to the mix, and the ability to play games on Android phones and tablets from the cloud (that portion is still in beta). This led to a question on Twitter asking if Xbox Game Pass would ever bring streaming to PC and console, which Xbox boss Phil Spencer answered. 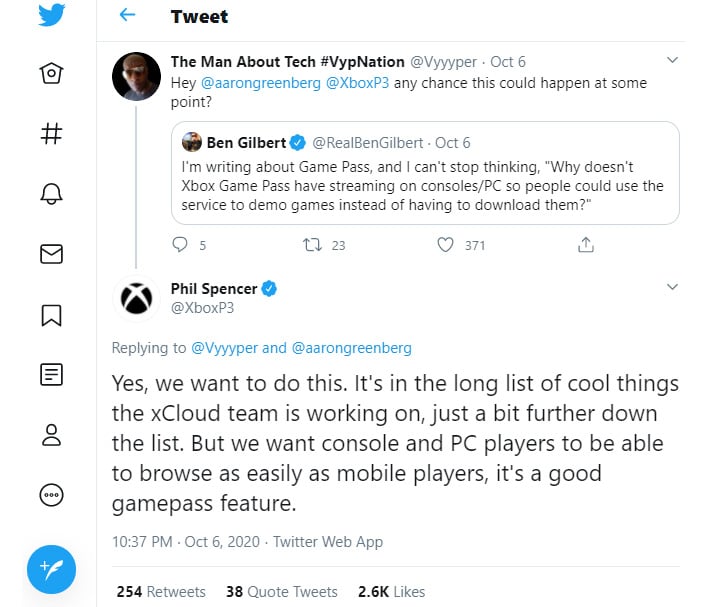 "Yes, we want to do this. It's in the long list of cool things the xCloud team is working on, just a bit further down the list. But we want console and PC players to be able to browse as easily as mobile players, it's a good Game Pass feature," Spencer said.
Spencer is right, it is a good feature, so it is nice to hear that Microsoft is working to bring it to PC and console as well. Exactly when remains a mystery, though, as Spencer only offered a vague time line, saying it sits a "bit further down the list" than other features that are also headed to Xbox Game Pass. But hey, at least it is on the list.