Microsoft Pushes Windows 10 Build 19041.488 With A Plethora Of Critical Bugfixes 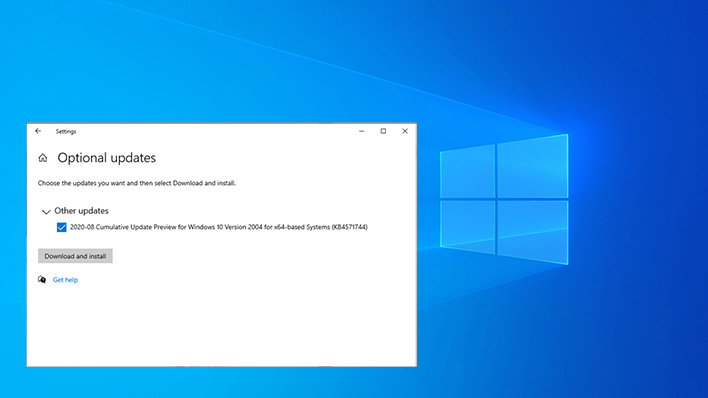 There is a cumulative update available for Windows 10 that is packed to the rafters with bug fixes and various improvements, and most people are probably unaware it exists. That's because it is currently only available as an optional update, in preview form. These same fixes should be included in the upcoming Patch Tuesday update, though some users may want consider installing it right away.
We are talking about KB4571744 for Windows 10 version 2004. One of the fixes it contains has to do with the drive optimization bug that could cause Windows to run an optimization routine on hard disk drives (HDDs) and solid state drives (SSDs) way more often than is necessary.
"Addresses an issue that causes the Optimize Drives dialog to incorrectly report that previously optimized drives need to be optimized again," Microsoft lists among the bug fixes.
This was an issue that was discovered by testers in the Windows Insider program. The concern is that it could cause Windows 10 to defragment an SSD, which should rarely (if ever) be done.
According to a blog post predating Windows 10 by Microsoft employee Scott Hanselman, Windows does actually defrag SSDs once a month (not to be confused with the TRIM command, which is beneficial). However, the bug could potentially cause this to happen daily on some PCs, depending on how they are configured, which in turn could shorten the lifespan of the SSD.

That's far from the only bug fix, though. Here is a list of highlights...
This is just a partial list. By our count, there are 72 fixes and improvements included in this cumulative update.
There are a couple of ways you can grab it. One is to head to Microsoft's Update Catalog and grab the appropriate package for your version of Windows 10. Alternatively, you can open Windows Update and do a scan, then click on View optional updates and expand the Other updates tree. You should see the cumulative update. Check the box and click Download and install.