Microsoft was once apprehensive about Linux, with Steve Ballmer likening the operating system in 2001 to a “cancer that attaches itself in an intellectual property sense to everything it touches.” While that wasn’t a very flattering portrayal of Linux and open source software by the then Microsoft CEO, the company has since embraced the open source movement, and Linux in particular.

At Microsoft’s BUILD 2020 event, which is streaming online right now, the company announced that it is ready to take its tight relationship with Linux to the next level. That means that full GUI support for Linux apps is now coming to Windows 10. Not only will there be Linux GUI support baked in to Windows 10, but GPU hardware acceleration will also be supported. 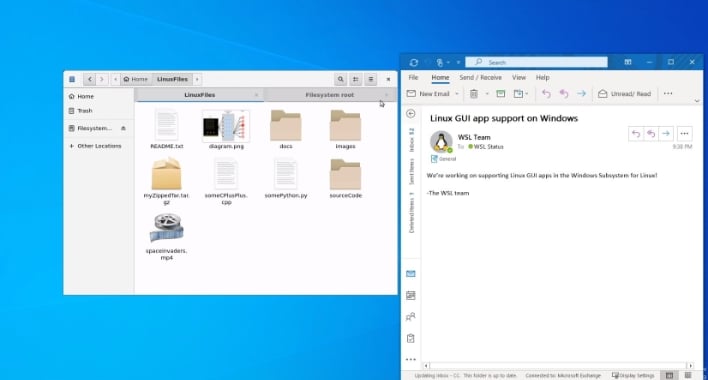 Limited GUI support was already possible with the first iteration of Windows Subsystem for Linux (WSL), but it relied on third-party X11 forwarding and suffered from poor performance. According to Microsoft, GPU acceleration will arrive first – within the next few months – to Windows 10 Insiders that are currently on the Fast ring. However, GUI support isn’t scheduled to arrive until later this year, likely with the Windows 10 Fall 2020 Update (or whatever Microsoft settles on for a name).

Microsoft is putting the finishing touches on WSL2, which will be available as a separate download from Windows Update rather than being integrated into Windows 10 by default. "If you’ve ever gone to your Windows settings, and clicked ‘Check for Updates’ you might have seen some other items being updated like Windows Defender malware definitions, or a new touchpad driver, etc.,” Microsoft explained in a March blog post. “The Linux kernel in WSL2 will now be serviced in this same method, which means you’ll get the latest kernel version independently of consuming an update to your Windows image.”

WSL and WSL2 are aimed at developers and provide access to Bash and Linux command-line tools that can be run together alongside traditional Windows 10 apps. It’s meant as a way to streamline the workflow for developers without the need of a virtual machine.