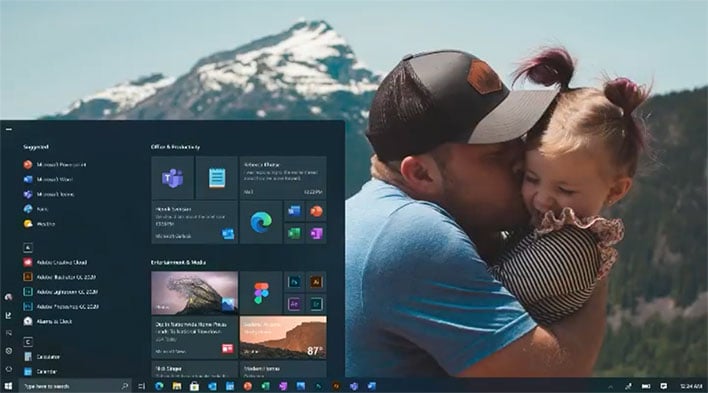 It may have taken a bit longer than Microsoft originally anticipated, but Windows 10 is now installed on more than one billion active devices (for real this time, unlike back in January when an Italian-language Microsoft website jumped the gun). To celebrate the achievement, Microsoft teased a fresh look headed to Windows 10.
Panos Panay, chief product officer of Microsoft's devices group, posted the teaser video on Instagram. It's a catchy little clip that highlights some of the visual changes users can expect to see in future builds of Windows 10, which notably includes a refresh of the Start Menu. At long last, Live Tiles are getting the boot in favor of app logos.

"The team made this video to celebrate making it to 1 billion MAD on Windows 10 and I wanted to share it with all of you. Now at a time when so much of our work and communication is taking place through our devices, it’s especially humbling to know that Windows can help empower a billion people to stay connected to the things and people they care about #Windows," Panay stated.

Live Tiles have been a visual staple of the Start Menu since Windows 10 debuted nearly five years ago. They are sort of a carryover from Windows 8/8.1, when Microsoft had hoped its Metro UI design would take off. It never did, and following the release of Windows 10, Microsoft has shifted its effort to a Fluent UI design language.
Brandon LeBlanc from the Windows Insider team had previously stated in a Mixer broadcast that the refreshed look "doesn't mean that Live Tiles are going away" completely. Instead, users will be able to switch between using Live Tiles or the new app logos. Whether that is still the case remains to be seen, but either way, the video Panay posted makes it clear that app logos are headed to Windows 10 one way or the other.

The video also highlights some other Fluent Design language elements. Microsoft is refreshing the File Explorer and Calendar apps in Windows 10. In addition, users will be able to resize the pointer and choose from a variety of colors (instead of just white), in an effort to make the look and feel of Windows 10 "more inclusive for everyone."
It's not clear when all of this will arrive. My hunch is we will not see the totality of elements previewed in the video with the Windows 10 20H1 update that will soon be released, but perhaps some or all of the changes will land with the next major update after that.