If you've had your eyes on the Microsoft Surface Pro X, but has been holding off for any particular reason, this is your chance to score a pretty hot deal on it. The Surface Pro X with a 256GB SSD is usually priced at $1,299, which is a pretty hefty chunk of change.

However, Amazon is currently selling the Arm-powered tablet for $899, which represents a hefty $400 discount compared to its MSRP of $1,299. This makes it even cheaper than the 128GB SKU, which is regularly priced at $999. Besides the aforementioned 256GB SSD, you'll find just 8GB of LPDDR4x RAM onboard along with the Microsoft SQ1 SoC. For those that don't recall, the SQ1 is a custom version of Qualcomm's Snapdragon 8cx Windows 10-centric SoC.

Presenting itself front and center is a 13-inch PixelSense Display with a resolution of 2880x1920 (3:2 aspect ratio). With respect to physical connectivity, you'll find two USB-C ports along with a proprietary Surface Connect port. Your wireless needs are handled by Wi-Fi 5, Bluetooth 5.0, and a Snapdragon X24 LTE modem (which you can use on your carrier of choice). And in case you were wondering, Microsoft says that the Surface Pro X can last up to 15 hours per charge. 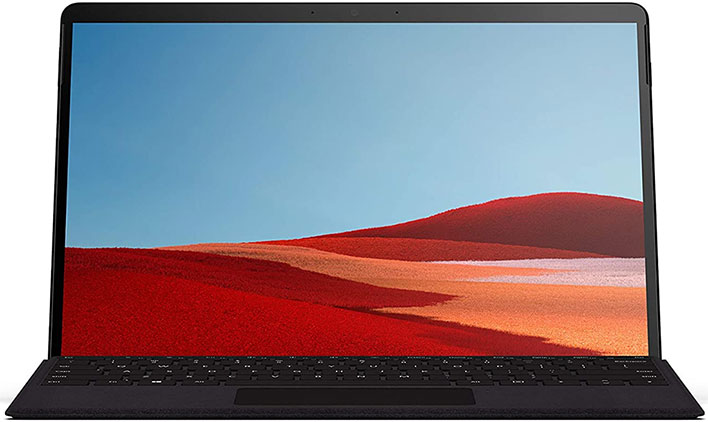 The Surface Pro X comes from the factory running Windows 10 Home on Arm, and can run 32-bit apps in emulation or Arm64 apps natively. However, x86-64 emulation is coming to Windows 10 on Arm, which Windows Chief Product Officer Panos Panay confirmed in late September:

We will also expand support for running x64 apps, with x64 emulation starting to roll out to the Windows Insider Program in November. Because developers asked, Visual Studio Code has also been updated and optimized for Windows 10 on ARM. For organizations, we’re committed to helping them ensure their apps work with Windows 10 and Microsoft 365 Apps on ARM64 devices with App Assure. We are working closely with Acer, HP, Lenovo, Samsung and Surface to bring these Windows 10 on ARM innovations and products to our shared customers.

Given that Microsoft says testing will kick off in November with Windows Insiders, we have the feeling that x86-64 support won't be officially rolled to the public until the Windows 10 21H1 Update, which should arrive next spring. You can grab Amazon's deal on the Surface Pro X 256GB right here.