We’ve previously heard rumors of a Surface Laptop Studio, and Microsoft made it official today with the reveal of its swanky new laptop. The Surface Laptop Studio serves as the successor to the Surface Book 3 and was billed as “the most powerful Surface we’ve ever built” and is the “culmination of years of Surface innovation.”

The display measures 14.4 inches across has a resolution of 2400x1600 with a fast 120Hz refresh rate and Dolby Vision support. In Laptop mode, the display functions as you would expect with a traditional touch screen laptop. Stage mode positions the display at about a 45-degree angle over the keyboard, still giving access to the trackpad (which now supports haptic feedback for the first time). Finally, Studio mode lays the display nearly flat to provide a large canvas for digital inking with the Surface Slim Pen 2.

Like the Surface Pro 8, the Surface Laptop Studio is powered by a family of 11th generation Intel Tiger Lake processors (up to a Core i7). In addition, 16GB and 32GB memory configurations are available, and you can opt for up to a 2TB SSD (which is user-replaceable). 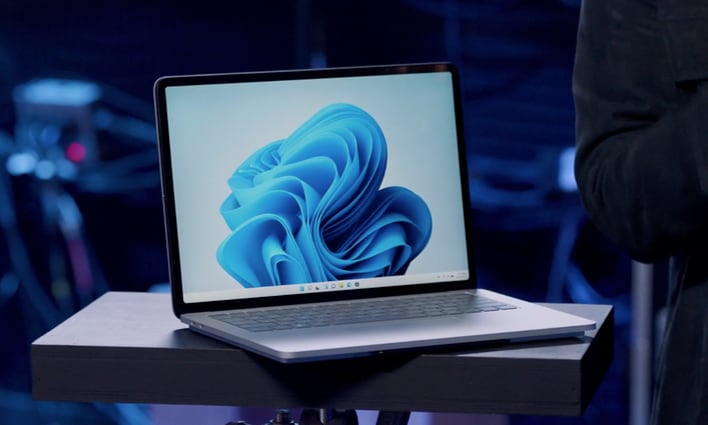 In addition to the beefy Tiger Lake processors, base Core i5 systems use the integrated Iris Xe GPU. However, the higher-end Core i7 SKUs get a discrete NVIDIA GeForce RTX 3050 GPU. As for connectivity, two Thunderbolt 4 ports an included along with the standard Surface Connect interface and a 3.5mm headphone jack.

Like the other new members of the Surface family, the Surface Laptop Studio ships on October 5th with a starting price of $1,599.