Gaming while on-the-go has gotten better over the years as handheld consoles are becoming more powerful and widespread. Now, Microsoft is taking things up a notch by turning its dual-screen Surface Duo into a versatile game-streaming device by updating the Xbox Cloud Gaming (xCloud) app for Android. This means gamers will have a virtual gamepad on one screen and the game on the other, which is rather awesome.

The update, which goes live today, brings the touch controls for any Xbox game down to the second screen on the Surface Duo, rather than being overlaid on the game. It makes console gaming on the go much easier and less claustrophobic-feeling than on a regular mobile device. This change also makes the Surface Duo look more like a Nintendo DS, but we digress as it is neat no matter what. 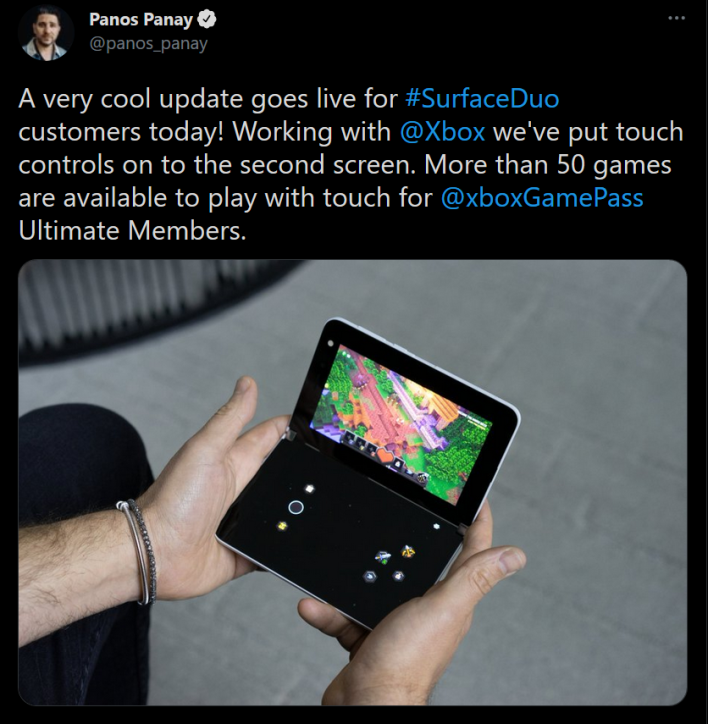 Chief Product Officer at Microsoft Panos Panay tweeted about this update, stating that more than 50 games are available to play with touch controls. You can see the entire list of touch games here by selecting the “cloud-enabled” category and selecting “Xbox Touch Controls” as a filter, but the list includes popular titles like Sea of Thieves, Gears 5, Minecraft Dungeons, and many more. Alternatively, you can use a regular Xbox or Bluetooth-enabled controller to stream games on the Surface Duo.

Microsoft also made some tweaks in the Xbox Cloud Gaming app to make life a little better for Surface Duo owners. These changes include making navigation easier, adding columned layouts, and simply making it easier to view content overall. If you own a Surface Duo and want to try this out, the app is now updated on the Google Play Store for download. Also, let us know what you think of this update and the inclusion of dual-screen devices in the comments below.